AMES, Iowa - Perhaps the three largest issues to face agriculture in this century are the food-versus-fuel debate in biofuel production, water and nutrient runoff, and soil erosion.

Now, an Iowa State University-based study over the next five years will examine whether a single, coordinated production system can address all of these concerns while making profits for producers.

A multi-state, interdisciplinary team led by Ken Moore, Charles F. Curtiss Distinguished Professor in the Department of Agronomy, recently won a $25 million grant from the U.S. Department of Agriculture's National Institute of Food and Agriculture and will develop the blueprint for using marginal farmlands to grow perennial grasses that will, in turn, provide a biomass source for a drop-in biofuel.

Growing those grasses currently has few benefits for the farmers who own the land and make the production decisions, however. And convincing farmers to take land out of corn production when prices hover near $7 per bushel will require developing a market for that perennial grass that gives producers a solid return.

"In general, the lands we are using in the research aren't really very good for producing food, so we are taking the food-versus-fuel argument out of the equation," said Moore. "By using perennial grasses on this land, we are reducing soil erosion, improving soil and water quality and even providing wildlife habitat."

Moore points out that often these lands are planted in corn and can have their yields reduced or lost due to flooding.

The research will focus on harvesting the grasses - mostly native species such as bluestem and switchgrass - and using the biomass as a feedstock for a biofuel process known as pyrolysis. 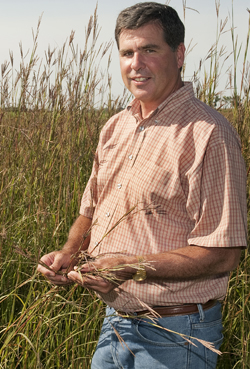 Information about the grant and latest results can be found on the project website at http://cenusa.iastate.edu.

Midwestern states were the logical choice, according to Moore, as the land, the producers, the scientists and the know-how are already in place.

Researchers will examine the best way to grow, harvest, transport, refine and distribute the biomass and biofuel, which is considered a drop-in fuel that can be added directly to other fuels without any special infrastructure.

The comprehensive study will also involve researchers from many disciplines in order to look at the big picture, said Moore.

"One of the great aspects of this is that we have everyone from agronomists, to engineers, to geneticists, to economists, to ecologists, to modelers," he added.

One of those experts is Robert C. Brown, the Gary and Donna Hoover Chair in Mechanical Engineering, Anson Marston Distinguished Professor in Engineering and Iowa Farm Bureau director of Iowa State University's Bioeconomy Institute. Brown will lead the pyrolysis research. 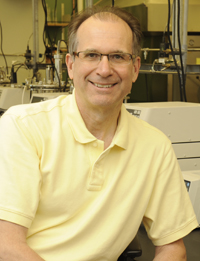 Pyrolysis is a process that uses thermal decomposition of biomass in the absence of oxygen to produce an energy-rich liquid known as bio-oil. Additional refining turns the bio-oil into gasoline and petrochemicals, according to Brown.

The bio-oil differs from cellulosic ethanol in several ways.

"In the case of bio-oil, we really don't care what the biomass is. It can be wood, straw, switchgrass, even paper waste -- anything that has cellulose in it, we can convert it into a uniform product called bio-oil using the pyrolysis process," he said.

"This is in contrast to biochemical approaches, which use enzymes and microorganisms to turn biomass into fuels. Specific enzymes are needed to break down different kinds of carbohydrates found in plants," he added. "This makes it more difficult to process diverse kinds of biomass."

While any cellulosic material can be converted to bio-oil, Brown says the amount of potassium in plants determines the efficiency of conversion to bio-oil.

That is a perfect match for the perennial grasses that are the focus of the study.

"Perennial grasses die back every year, returning nutrients to the roots where they are stored to support new growth in the spring," said Brown. "This allows us to harvest biomass without removing much of the deleterious potassium."

Part of the agronomic research of the study will be looking at ways to produce bluestem and switchgrass with the trait of having less potassium in the biomass at harvest time.

Brown said that interest in bio-oil has "exploded" in the past three years partly because it is considered a drop-in fuel that can be added directly to the U.S. gasoline delivery system.

"This process gives us the ability to produce, essentially, the same kind of fuel (gasoline) we are using today in automobiles, but we are producing it from renewable resources," said Brown.

A co-product of the pyrolysis process is a carbon- and nutrient-rich solid called biochar that can be used to as a soil amendment to increase the productivity of poor soils.

Brown said preliminary research suggests that biochar can improve corn production in marginal soils. He has even run experiments in his own garden that have increased his harvest of tomatoes by 70 percent.

Biochar improves Iowa soils only slightly, while as much as doubling the productivity of poor soils, he said.

"It could change the face of agriculture in Africa, potentially increasing corn yields to become comparable to U.S. agriculture," said Brown.

In addition to the pyrolysis research, Moore and his team will focus on how to develop flexible, efficient and sustainable logistics systems; identify and characterize sustainable bioenergy systems to achieve social, economic and environmental goals and understand socioeconomic and environmental consequences of perennial bioenergy systems; identify germplasm characteristics amenable to pyrolytic conversion and evaluate performance of pyrolytic biofuels; evaluate policy, market and contract mechanisms to facilitate broad adoption by farmers; develop procedures for managing risks and protecting health for each component of the biofuel productions chain; provide interdisciplinary education and engagement opportunities for undergraduate and graduate students; and develop outreach programs for all stakeholders of the bioenergy system.

This project was supported by Agriculture and Food Research Initiative Competitive Grant no. 2011-68005-30411 from the USDA National Institute of Food and Agriculture.

By using perennial grasses on this land, we are reducing soil erosion, improving soil and water quality and even providing wildlife habitat.

The USDA awarded an Iowa State University-led group a $25 million grant from the National Institute of Food and Agriculture to develop the blueprint for using marginal farmlands to grow perennial grasses that will, in turn, provide a biomass source for a drop-in biofuel-based fuel over the next five years. The multi-state, interdisciplinary team is lead by Ken Moore, Charles F. Curtiss Distinguished Professor in the Department of Agronomy.

A print-quality photo of Ken Moore is available here.

This process gives us the ability to produce, essentially, the same kind of fuel (gasoline) we are using today in automobiles, but we are producing it from renewable resources.