The Cyclone Power Pullers won Most Improved Team honors during the recent International ¼-Scale Tractor Student Design Competition in Peoria, Ill. Peter Horne, a team leader and a May graduate in agricultural engineering, said the team jumped 17 places over last year's performance, all the way to fourth of 27 teams. "We were pretty happy with our results," he said. "Even though we were 12th in the pull, we were within 80 to 90 percent of the top puller." The team also brought home a second place award for its written design report. 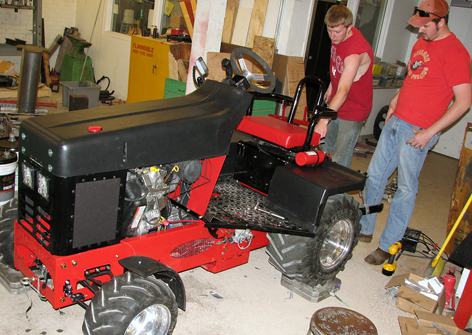 AMES, Iowa - This year's ¼-scale tractor looks a lot more like a garden tractor than a hot rod pulling tractor.

There's a nice black hood. LED headlights for the front. And a three-point hitch for the back.

It's all about selling the 31-horsepower tractor as a multi-use vehicle for home, garden or acreage. And that could help the Cyclone Power Pullers, Iowa State University's ¼-scale tractor team, score some design and aesthetics points in the International ¼-Scale Tractor Student Design Competition May 31-June 3 in Peoria, Ill. The contest is sponsored by the American Society of Agricultural and Biological Engineers.But take a closer look underneath the hood of a $28,000, student-designed and student-built machine dubbed "Cymon Sez" and you'll see the heavy duty frame and drivetrain of a pulling tractor. You'll also hear Iowa State students explain how their new, infinitely variable transmission helps keep the engine in its optimal power band.

Peter Horne, a May graduate in agricultural engineering from Harlan who's starting a career as a design engineer, said in testing the drivetrain has produced 2,600 inch-pounds of torque or rotating force.

"We're pretty excited about this year," said Horne, who's leading the team building the new tractor.

Derek Hruska, a recent agricultural engineering graduate from Cresco, said team members have looked over the data from past competitions and found tractors from other schools have spiked at about 2,600 inch-pounds of torque. The Iowa State machine can maintain that force through a wider range of engine operation.

The Peoria competition also asks teams to rebuild and improve last year's tractors. It's a job the Cyclone Power Pullers are happy to take on.

Last year's tractor had problems with a drive shaft that flexed under power, said Alex Haight, a junior agricultural engineering major from Waterloo. And that led to other problems, including clutch failure.

To fix that, Haight said the team has installed extra bearings and replaced a chain drive with a belt system more suited to higher engine speeds. And so far, he said the fixes seem to be working and the tractor is running smoothly.

The final test for both tractors, of course, will be in the pulling arena.

"I think we'll do pretty good," Hruska said while he and Aaron Nissen, a senior from Audubon who's studying agricultural engineering, were working to trim a few pounds from the new tractor. "We have quite a bit of engineering behind this." 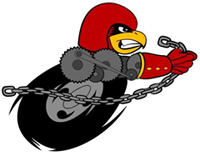 "I think we'll do pretty good. We have quite a bit of engineering behind this."