Finally. Just in time for the two racing events at the Formula SAE contest in Lincoln, Neb., for student-designed and student-built race cars, Iowa State’s team was able to fire up its mini open-wheel racer. “The car was still a little unfinished,” said Derek Roberg, a senior from Manchester who’s studying mechanical engineering and is the team’s technical director. But, the team had finally fired the engine and the car was on track. The team finished in the middle of the pack after the contest’s shorter autocross race. The team ran well through the first half of the longer endurance race. Then, during a driver change, judges noticed a small oil puddle under the car. And that was it for the team. “The car drove great,” Roberg said. “We just needed a little more time, I guess.” 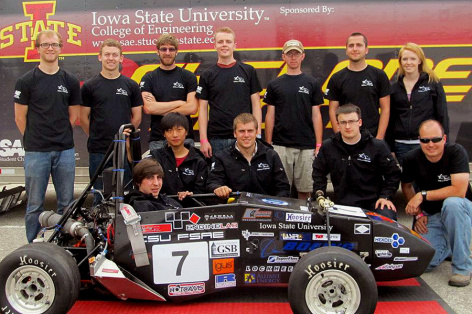 AMES, Iowa – The stress level is finally dropping in the Cyclone Racing shop on the Iowa State University campus.

Formula SAE’s June 20-23 competition in Lincoln, Neb., is just days away. And the Yamaha YFZ450 engine in the back of the student-designed and student-built mini open-wheel racer is finally close to powering some last-minute tests.

Derek Roberg, a senior from Manchester who’s studying mechanical engineering and is the team’s technical director, and other team members have been hustling to figure out why their engine won’t fire. Is it something with engine timing? Is there a problem with the power-restricting air intake? Is the air filter interfering with the carburetor? Is it the wiring? Or is it something else?

It certainly has been a mystery. The first time the team fired up the engine, it started right up and the team was able to do some quick tests. But it suddenly went rough and the team has been searching for answers since.

The search included a trip to Barrie, Ontario, Canada, for the May 24-27 Formula North 2012 competition. It wasn’t an official competition sanctioned by SAE International, formerly known as the Society of Automotive Engineers. But the competition followed the SAE rules and the team looked at it as a good practice session.

Unfortunately, the engine problems kept the team off the track. But the team was able to go through the engineering design, cost and marketing presentations.

The team is hoping for a much better showing at the Formula SAE contest at the Lincoln Airpark. And Roberg said there are reasons for optimism:

“This is a radically different car from anything we’ve ever done,” Roberg said. “The whole car is more compact.”

Some of those ideas – smaller wheels, bonded body panels – may be built into next year’s car. But the engine compartment is so tight it can be difficult to do engine work. So that’s an idea that may be tweaked next year.

But the priority of the day (and night) around the shop has been getting the engine fired and running. Once that happens, the team wants to get out to campus parking lots for some test runs.

“We hope to be testing for at least a day before we leave,” Roberg said. If that happens, “I think this will be a fast car. It’s a very light car.”

“We have assumptions,” said Riley, sounding very much like an engineer, “but no data. We need to look at test data and think of more improvements.” 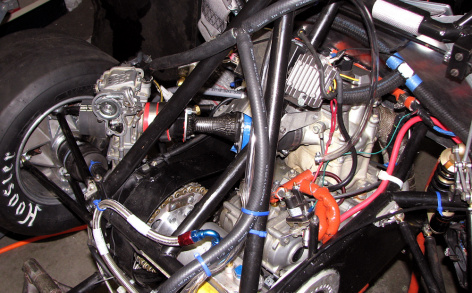 Cyclone Racing's Formula team races its mini open-wheel car this week in a Lincoln, Neb., competition sponsored by SAE International, formerly known as the Society of Automotive Engineers. The team has been having problems with its Yamaha engine and has been scrambling to engineer a solution. If the engine problem is solved, team members think the car's lightweight, compact design could be quick on a race course.

“This is a radically different car from anything we’ve ever done,” Roberg said. “The whole car is more compact.”

Derek Roberg, a senior from Manchester who’s studying mechanical engineering and is the team’s technical director