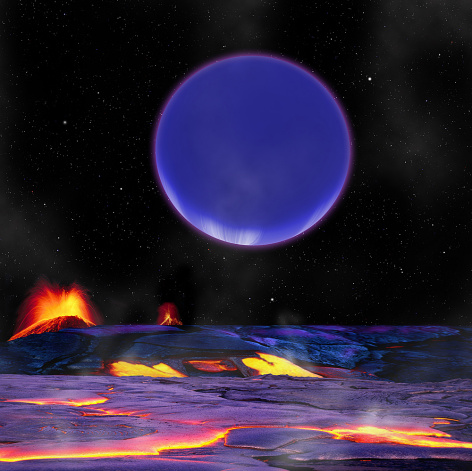 Two planets discovered by NASA's Kepler spacecraft are orbiting surprisingly close to each other. This image shows how one of the planets might look from the surface of the neighboring planet. Larger image. Image courtesy of Harvard-Smithsonian Center for Astrophysics/David Aguilar.

AMES, Iowa – Two planets with very different densities and compositions are locked in surprisingly close orbits around their host star, according to astronomers working with NASA’s Kepler Mission.

The discovery of the Kepler-36 planetary system about 1,200 light years from Earth is an example of planets breaking with the planetary pattern of our solar system: rocky planets orbiting close to the sun and gas giants orbiting farther away.

The discovery is reported June 21 in the online Science Express. Lead authors of the study are Joshua Carter, a Hubble Fellow at the Harvard-Smithsonian Center for Astrophysics, and Eric Agol, an associate professor of astronomy at the University of Washington.

“The planetary system reported in this paper is another example of an ‘extreme’ planetary system that will serve as a stimulus to theories of planet migration and orbital rearrangement,” researchers wrote in the paper.

Steve Kawaler, an Iowa State University professor of physics and astronomy, was part of the research team that provided information about the properties of the planets’ host star. He and other researchers measured changes in the star’s brightness to precisely identify the size, mass and age of the host star.

Kawaler explained the importance of the discovery:

“Small, rocky planets should form in the hot part of the solar system, close to their host star – like Mercury, Venus and Earth in our Solar System. Bigger, less dense planets – Jupiter, Uranus – can only form farther away from their host, where it is cool enough for volatile material like water ice, and methane ice to collect. In some cases, these large planets can migrate close in after they form, during the last stages of planet formation, but in so doing they should eject or destroy the low-mass inner planets.

“Here, we have a pair of planets in nearby orbits but with very different densities. How they both got there and survived is a mystery.”

The discovery was made possible by NASA’s Kepler Mission, a spacecraft launched in 2009 that’s carrying a photometer to measure changes in star brightness. Its primary job is to use tiny variations in the brightness of the stars within its view to find earth-like planets that might be able to support life.

The Kepler Asteroseismic Investigation is also using data from that photometer to study star oscillations, or changes in brightness, that offer clues to a star’s interior structure. The investigation is led by a four-member steering committee: Kawaler, Chair Ron Gilliland of the Space Telescope Science Institute based in Baltimore, Jorgen Christensen-Dalsgaard and Hans Kjeldsen, both of Aarhus University in Aarhus, Denmark.

Kawaler said the Kepler spacecraft was essential to discovering what the researchers called in their paper “this puzzling pair of planets.”

Astronomers using data from NASA's Kepler Mission have found a planetary odd couple 1,200 light years from Earth. The two planets with very different densities and compositions -- which are typically in very different orbits -- are orbiting close to each other. The discovery is published online by Science Express. Iowa State University's Steve Kawaler is part of the team that wrote the paper and a leader of Kepler star studies.

“Here, we have a pair of planets in nearby orbits but with very different densities. How they both got there and survived is a mystery.”