The students helped refine the exhibit concept, build the model, research the hardware, program the games, design the custom control system, write the software, build the web browser and much more.

"They made it actually work," said Arthur Croyle, associate professor of integrated studio arts and one of the exhibit designers. "We really couldn't have done it without them. We had the idea and concept, but they actually made it work." 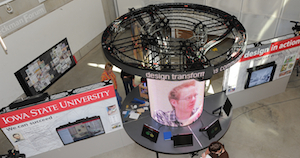 The "Transforming Communities: Design in Action" exhibit blends advanced interactive technology and old-fashioned conversation to demonstrate the techniques and processes designers use to help communities solve complex problems. Created by a team from the College of Design and ISU Extension and Outreach, the exhibit highlights the role of design in the land grant mission. Iowa State was one of 17 land-grant universities selected to participate in the festival's celebration of the 150th anniversary of the founding of land grants.

Edmondson, who has an interest in exhibit design, heard about the Smithsonian exhibit in January. She asked to do an independent study with David Ringholz, chair of industrial design and lead exhibit designer. As a member of the exhibit design team, she's been "at the table" ever since, contributing in countless ways and soaking up the experience.

"I've participated in the exhibit design almost from its infancy," Edmondson said. "Part of the joy of designing in a group is the wonderful discussions that occur when designers work together to shape a project that creates an effective experience for the exhibit user."

Edmondson oversaw a student design competition (see sidebar), built the scale model of the exhibit and interviewed faculty for a video that is part of the exhibit. And she served as liaison between the design team and the student programmers to assist in creating the touchscreen games.

"I've learned a great deal about communication, organization and the importance of building a good team," she said.

Edmondson will staff the exhibit throughout the festival along with university faculty and Extension and Outreach staff.

"I'm passionate about design, so I think I'm most excited about the opportunity to share that passion with Folklife Festival visitors in our nation's capital," Edmondson said.

Van Oort also will be staffing the Iowa State exhibit on the National Mall. He will manage the exhibit's extensive hardware and software, which he helped plan and develop. As the student technology lead on the exhibit, he advised the design and content teams on all aspects of technology — from software and hardware possibilities to dust, cooling and power conditioning issues to building a custom control system. 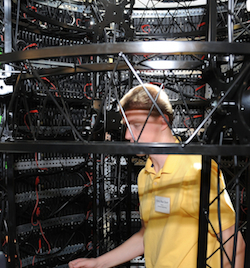 "Specifically, I've designed the communication and control system between four touchscreen kiosks, a server and laptop that controls the huge LED displays. I also wrote a custom, full-screen, secure Web Kit-based internet browser for the kiosks," Van Oort said.The vast array of technology involved in the exhibit required development of a system capable of driving and controlling the various elements. A network of computers controls the elements and allows them to function together. iPads send text content to the LED ribbon-crawl atop the central column, a laptop streams video to the LED video screen and MacMinis control content on touchscreen game kiosks and TV monitors. In addition, each type of display requires a separate video controller. Van Oort was tasked with making all of the elements work together by using and designing multiple software applications.

"It's going to be pretty neat to have a million people flow through the exhibit and interact with the software and hardware we spent months planning and developing," Van Oort said.

Van Oort enlisted a team of "top-notch" students from across campus to work on the project. Ore set up the web server that sends content to the displays and queues up messages for the marquee.

Three students worked on the programming for the touchscreen games, developing them as web apps that will send content to the back-end control system for display on the LED screens. Waters worked on the touchscreen games using HTML, JavaScript and CSS. He also helped wire the exhibit and test the panels. Brumm wrote the entire HTML code for the layout and styling of the games, and helped with the JavaScript that was needed. And Zhang worked on the game and web programming.

"We've been tackling challenges since day one — choosing the right hardware to achieve the desired result from the exhibit, then understanding how to build a system that could interact with the LED displays and dynamically provide content," Van Oort said. "I'm not sure a lot of people around the world have ever pulled off what we're doing."

Carver has been an intern for the university's Center for Excellence in the Arts and Humanities since January. During the past three weeks, he worked on the exhibit full time, helping with the logistics, wiring, crate building and packing, and anything the exhibit team needed.

"I have very little experience with technology, so it's been great to learn so much about electrical power and LED technology," Carver said.

Carver will join the exhibit staff for the final days of the folklife festival and help with the exhibit tear down, packing and shipping.

"They made it actually work." 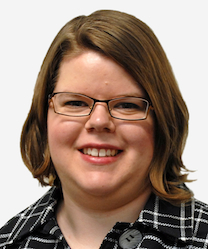 Amy Edmondson was on the design team.

For a project in an architecture studio class this spring, Lecturers Patrick Rhodes and James Spiller asked students to design a human-scale machine that measures some kind of phenomenon (light, wind or sound, etc.) and engages the body. And 80 percent of their machines had to be constructed from recycled materials. Three of the students' projects will be part of Iowa State's exhibit at the Smithsonian Folklife Festival, and a fourth will be represented in a video. They were selected from 20 entries submitted in the student competition to design an interactive feature that focuses on design thinking and innovation for the Iowa State exhibit.