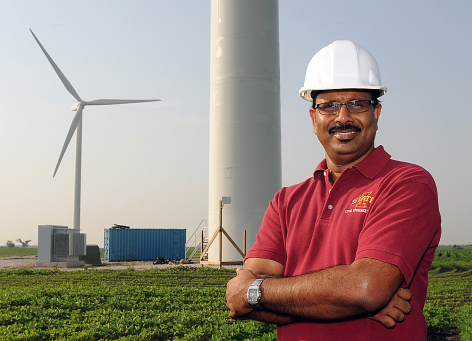 Sri Sritharan leads the College of Engineering's Wind Energy Initiative. The initiative is building research and education programs in many aspects of wind energy. Larger photo. Photo by Bob Elbert.

And so they’re building programs and partnerships to boost the university’s expertise in just about every aspect of the wind energy industry: aerodynamics, grid integration, manufacturing, meteorology, nacelles and blades, policy, reliability and towers.

So far, the College of Engineering’s Wind Energy Initiative has attracted more than $6 million in grants to support education and research projects.

“At the national level, wind energy is becoming very prominent,” said Sri Sritharan, Iowa State’s Wilson Engineering Professor; the associate chair for graduate study and research for the department of civil, construction and environmental engineering; and the leader of the Wind Energy Initiative. “The Department of Energy has proposed a scenario of 20 percent of electrical energy from wind by 2030. That means you have to increase wind energy production by at least 10 times over the next 18 years.”

The wind project is one of the three Dean’s Research Initiatives launched by Jonathan Wickert, dean of the College of Engineering and, effective July 30, Iowa State’s next senior vice president and provost. The initiatives in wind, a carbon-negative economy and computational biology were each launched in March 2011 with $500,000 to build interdisciplinary research teams that can compete for multi-million dollar grants and projects.

Already, for example, the wind initiative has attracted $3.2 million to develop the country’s first doctoral program in wind energy science, engineering and policy; $1.3 million to study the icing and de-icing of wind turbine blades; and $1 million for advanced manufacturing research.

Sritharan said Iowa and Iowa State have some competitive advantages when it comes to wind energy. Iowa is the nation’s No. 2 state in wind energy production. The state already produces about 20 percent of its electrical energy from wind. The state is also home to facilities that manufacture wind blades, turbines and towers. And Iowa State has strengths in engineering, manufacturing and materials research.

Iowa State administrators and researchers have been working for several years to build the university’s capabilities in wind energy research. Developments have included establishing the Wind Energy Manufacturing Laboratory, planning a national workshop exploring manufacturability issues, developing a minor in wind energy for engineering students and conducting a summer research program for undergraduates.

Sritharan said wind energy companies and researchers are becoming more aware of all the activity at Iowa State and showing significant interest in engaging with the university.

“In terms of our research, the attention is definitely up,” Sritharan said. “The typical comment we get is, ‘We didn’t realize Iowa State is doing so many things in wind energy.’”

That has Iowa State researchers taking calls from other university, government and industry researchers looking to build collaborations and to compete for major grants.

“We want to position ourselves for some big grants,” Sritharan said. “We’re making good progress. If we can secure one or two big grants, that will put us in a stronger position.”

It would put Iowa State in a position to influence the country’s energy future.

“The ultimate goal of the combined Wind Energy Initiative’s research and education advances is to make wind energy competitive with other energy sources,” says a summary of the initiative. “This would be done by reducing capital costs, minimizing operation and maintenance costs, increasing output through efficiency and system design and improving grid operation for wind energy.”

Yes, said Sritharan, “We want to make Iowa State University known as a place for wind energy research and education.”

The College of Engineering's Wind Energy Initiative is building research and education programs at Iowa State University. Since it was launched in March 2011, the initiative has attracted more than $6 million in grants to support a growing list of projects. The initiative's goal is to continue building research collaborations that can compete for even bigger grants.

“In terms of our research, the attention is definitely up. The typical comment we get is, ‘We didn’t realize Iowa State is doing so many things in wind energy.’”

Sri Sritharan, Iowa State’s Wilson Engineering Professor, the College of Engineering’s associate chair for graduate study and research and the leader of the Wind Energy Initiative