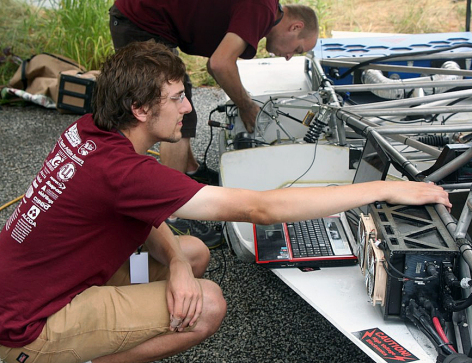 First, the designers and builders of Iowa State’s solar race car started day two of the 1,650-mile American Solar Challenge with a low battery pack because of cloudy and rainy charging conditions. Then they left the start line in the middle of thunderstorms. Then the wet conditions caused radio problems. And then Hyperion, this year’s solar race car, went wide in a turn on an interstate on-ramp and hit a curb.

The impact snapped the lower A-arm of the right-front suspension and damaged the aerodynamic fairing covering the wheel. It took the team about an hour to make enough repairs to get back in the race.

The best news of the day is that nobody was injured in the accident.

“This is kind of a bummer,” said Evan Stumpges, the team’s project director and a May graduate in mechanical engineering. “This is the first day of facing some hardships, but it gives us some challenges to overcome.”

Those challenges include working out of the team trailer to repair the damaged fairing pieces and rewire the radio equipment.

The team’s goal for Monday is to make a quick 20-mile drive to the race’s next checkpoint in Mansfield, Ohio, and then race all the way to the next stop in Ann Arbor, Mich.

Team PrISUm isn’t the only team that struggled on Sunday. Stumpges said the MIT car also hit a curb and took a lot of body damage. The MIT team decided to take a race penalty and haul its car to Ann Arbor for some major repairs.

“This was a hard day for a lot of teams,” Stumpges said.

If the team can race under sunny skies on Monday, Stumpges thinks Hyperion can gain some speed and pass some teams.

“It was a pretty lousy day for solar racing on any front,” he said. “Hopefully, we’ll see better days ahead.”

It was a tough day at the American Solar Challenge for Team PrISUm on Sunday. The team lost a lot of time with a low battery pack, thunderstorms and radio problems. And then the team's car hit a curb, breaking the suspension and forcing roadside repairs. The team is hoping for better racing -- and sunnier skies -- on Monday.

“It was a pretty lousy day for solar racing on any front. Hopefully, we’ll see better days ahead.”

Evan Stumpges, the team’s project director and a May graduate in mechanical engineering