The award is the highest honor awarded by the United States government to science and engineering professionals in the early stages of their research careers. Sanchez was nominated for the award by the National Science Foundation, which is supporting her work with a five-year, $709,000 grant from its Faculty Early Career Development Program.

“Discoveries in science and technology not only strengthen our economy, they inspire us as a people.” President Barack Obama said.  “The impressive accomplishments of today’s awardees so early in their careers promise even greater advances in the years ahead.”

“I was just happy when I heard,” said Sanchez, an Iowa State University assistant professor of physics and astronomy with a joint appointment at the U.S. Department of Energy’s Argonne National Laboratory in Argonne, Ill. “I’m really, really honored.”

Sanchez is an experimental physicist studying neutrinos. (The universe is full of the subatomic particles that rarely interact with matter; trillions of them pass through our bodies each day.) She’s currently affiliated with the proposed Long Baseline Neutrino Experiment which would send the world’s most intense beam of neutrinos from the Fermi National Accelerator Laboratory in Batavia, Ill., to the Homestake Mine in Lead, S.D. She is also working on the MINOS and NOvA experiments designed to study neutrinos sent from Fermilab to detectors in northern Minnesota.

Sanchez has been working to apply the next generation of the photodetectors that spot Cherenkov light, the blue glow emitted when a charged particle passes through water and other transparent materials faster than light. This occurs because materials can slow light more than they can slow subatomic particles.

Neutrino physicists surround huge pools of water with sensitive photodetectors to find any Cherenkov light emitted when chargeless neutrinos hit hydrogen and oxygen atoms and throw off charged particles such as electrons.

Current photodetector technology is very expensive. Sanchez and other researchers at Argonne are working to apply advances in materials science and nanotechnology to make photodetectors more effective and less expensive.

Sanchez said the advancements in detector technology could also be a boost to medical imaging and other applications. And she said a better understanding of neutrinos could help researchers better understand the evolution of the universe.

The presidential awards were established by President Clinton in 1996. They are coordinated by the Office of Science and Technology Policy within the Executive Office of the President. Awardees are selected for their pursuit of innovative research at the frontiers of science and technology and their commitment to community service as demonstrated through scientific leadership, public education, or community outreach. 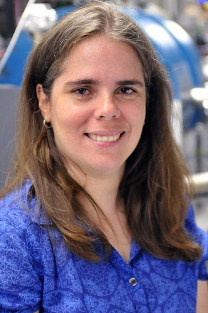 Mayly Sanchez of Iowa State University and the Argonne National Laboratory near Chicago has been awarded a Presidential Early Career Award for Scientists and Engineers. It is the highest honor awarded by the U.S. government for early career researchers in science and engineering. Sanchez studies neutrinos and is working with several major physics experiments.

"Discoveries in science and technology not only strengthen our economy, they inspire us as a people. The impressive accomplishments of today’s awardees so early in their careers promise even greater advances in the years ahead.”