Ron Prescott, retail and small business specialist with Iowa State University's Extension and Outreach Community and Economic Development and department of economics, is not surprised by the retailer that tops the list in terms of total retail sales in 2011.

"It is of no surprise that Wal-Mart once again topped the list with $316 billion in U.S. retail sales, which represents 69.6 percent of their worldwide sales," Prescott said. "This also represents 7.6 percent of all retail sales in the U.S. and provides a substantial gap between the second place position held by Kroger, at $85 billion in total sales."

Prescott sees Americans adjusting their diets to include more natural and organic foods according to the new list.

"Number one on the list is Sprouts Farmers Market, headquartered in Phoenix, Ariz., which had sales growth of 71.9 percent. It opened over 50 markets in 2011," Prescott said. "Sprouts was not alone among the more natural and organic food stores on the list. They included Fresh and Easy Neighborhood Market (11), The Fresh Market (31), Whole Foods Market (38) & Trader Joe’s (80)."

Prescott also made these observations: 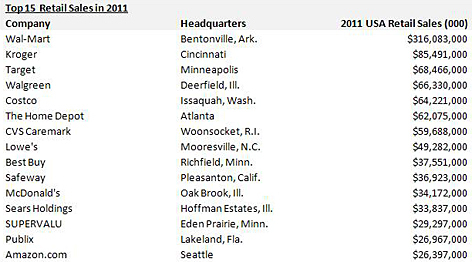 Ron Prescott, retail and small business specialist with Iowa State's Extension and Outreach Community and Economic Development and department of economics, provided his analysis of the "Hot 100 Retailers" list published in the August issue of the National Retail Federation's Stores Magazine.