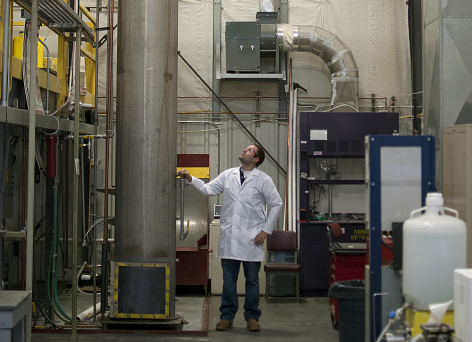 AMES, Iowa – Initial studies show a fungus grown in the leftovers of ethanol production could be a good energy feed for pigs and chickens.

In separate feeding trials, nursery pigs and chickens have eaten high-protein fungi that Hans van Leeuwen and other Iowa State University researchers have produced in a pilot plant that converts ethanol leftovers into food-grade fungi. The production process also cleans some of the water used to produce ethanol, boosting the amount of water that can be recycled back into biofuel production and saving energy on water cleanup and co-product recovery.

So far in the feeding trials, researchers have found pig performance wasn’t impacted when dried fungi were substituted for corn or soybean meal, said Nicholas Gabler, an assistant professor of animal science. Researchers are still studying the effects of the feed on amino acid availability, tissue growth, and intestinal health.

The fungi produce a high-energy feed for chickens, said Mike Persia, an assistant professor of animal science. He said more studies need to be done, “but generally I think there’s some value there.”

The fungi-production process was developed by a research team led by van Leeuwen, a professor of civil, construction and environmental engineering. The process has two patents pending and has won several major awards – most recently it was named the global grand winner of the International Water Association’s 2012 Project Innovation Awards in Applied Research.

“It’s a great feeling,” van Leeuwen said of the latest award. “The International Water Association is the top water quality organization in the world. We were up against multi-million dollar projects and we’ve been working on a shoestring. To get this is as gratifying as winning an Olympic medal.”

Van Leeuwen, who was named R&D Magazine’s 2009 Innovator of the Year, and the research team have been working on their “MycoMeal” process for several years. It began as an idea to improve the dry-grind process used to produce ethanol from corn.

Here’s how the process works:

For every gallon of ethanol produced, there are about five gallons of leftovers known as stillage. The stillage contains solids and other organic material. Most of the solids are removed by centrifugation and dried into distillers dried grains that are sold as livestock feed, primarily for cattle.

The remaining liquid, known as thin stillage, still contains some solids, a variety of organic compounds and enzymes. Because the compounds and solids can interfere with ethanol production, only about 50 percent of thin stillage can be recycled back into biofuel production. The rest is evaporated and blended with distillers dried grains.

The Iowa State researchers add fungus (Rhizopus microsporus) to the thin stillage and it feeds and grows into easily harvested pellets in less than a day – van Leeuwen calls it "lightning-speed farming." The fungus removes about 60 percent of the organic material and most of the solids, allowing the water and enzymes in the thin stillage to be recycled back into production.

The fungus is then harvested and dried as animal feed that's rich in protein, certain essential amino acids, polyunsaturated oils and other nutrients. It can be blended with distillers dried grains to boost its value as a livestock feed and make it more suitable for feeding hogs and chickens. And van Leeuwen hopes the fungal product could one day be a low-cost nutritional supplement for people.

Van Leeuwen said the production technology can save United States ethanol producers up to $800 million a year in energy costs. He also said the technology can produce ethanol co-products worth another $800 million or more per year, depending on how it is used and marketed.

Researchers have developed a 400-gallon pilot plant at the Iowa Energy Center’s Biomass Energy Conversion facility in Nevada to test and refine the process. They’re producing a ton of the fungi this year for the animal feeding trials. (“That’s no minor feat for a pilot plant,” van Leeuwen said.)

There has been some commercial interest in the process, van Leeuwen said.

The project has been supported by a three-year, $412,669 grant from the Iowa Energy Center and a Smithfield grant from the Office of the Iowa Attorney General. Lincolnway Energy of Nevada; Cellencor Inc. of the Iowa State University Research Park; and Iowa State's Center for Crops Utilization Research and BioCentury Research Farm are also supporting the project.

With this summer’s drought and concerns about high prices for corn, van Leeuwen said there could be new interest in transferring the technology to the ethanol industry. 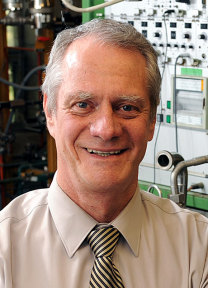 An Iowa State University research team led by Hans van Leeuwen is feeding high-protein fungi grown on the leftovers of ethanol production to pigs and chickens. The feed-production process also cleans some of the water used in ethanol production, allowing more water to be recycled back into biofuel production. The process was recently named a global grand winner of the International Water Association's Project Innovation Awards in Applied Research.

“It’s a great feeling. The International Water Association is the top water quality organization in the world. We were up against multi-million dollar projects and we’ve been working on a shoestring. To get this is as gratifying as winning an Olympic medal.”