Erskine Bowles will speak about the national debt at Iowa State University Sept. 13

AMES, Iowa -- Erskine Bowles, president emeritus of the 17-campus University of North Carolina (UNC) system and co-chair of a bipartisan national commission on debt reduction, will speak at Iowa State University about the country's fiscal health.

Bowles is at the center of the national dialogue on America's deficit crisis. In an Aug. 9 opinion piece in The Washington Post, Bowles commended President Barack Obama and Mitt Romney for their plans to reduce long-term spending, but advocated that "real deficit reduction ... won't happen without sweeping tax reform ... This fall, the American people deserve a serious national debate about our debt, not easy promises." Washington, D.C., political pundits have speculated that Bowles will be named treasury secretary if Obama is re-elected.

Bowles' talk, "A Conversation on the National Debt," will be at 8 p.m. Thursday, Sept. 13, in the Memorial Union Great Hall. It is free and open to the public.

At 10 a.m. Friday, Sept. 14, Bowles will introduce Steven Leath during Leath's celebratory installation as Iowa State's 15th president. Leath served as a vice president for the UNC system during Bowles' tenure as president (2006-10).

From private sector to public service

A veteran of business and government service, Bowles worked in the private sector from the 1970s to the 1990s. After earning his undergraduate business degree at UNC and MBA at Columbia University, he joined Morgan Stanley in New York City, and later founded his own financial investment company. In 1993, President Bill Clinton appointed Bowles as director of the Small Business Administration. The following year, Clinton tapped Bowles to be his White House deputy chief of staff, and later chief of staff. During his tenure in the White House, Bowles played a pivotal role in negotiating America's first balanced budget in decades. He also coordinated the federal response to the Oklahoma City bombing.

Following his tenure at the White House, Bowles spent two years as a general partner with Forstmann Little, a New York-based equity firm, and returned to North Carolina. After two unsuccessful U.S. Senate runs (2002 and 2004) in his home state, Bowles rejoined Clinton in 2005 as United Nations deputy special envoy to help coordinate a global response to the tsunami that struck Southeast Asia in December 2004. He served as the UNC system president from Jan. 1, 2006, until his retirement on Dec. 31, 2010.

In 2010, Obama appointed Bowles and former Wyoming Sen. Alan Simpson co-chairs of the National Commission on Fiscal Responsibility and Reform. The bipartisan commission produced a plan to reduce the nation's deficits by $4 trillion over the next decade. Although widely praised, the commission's recommendations of tax increases and spending cuts have made little progress in a divided Congress.

Bowles helped found three entities that foster economic development in rural North Carolina. He has served as vice chair of Carolinas Medical Center in Charlotte and as an international president of the Juvenile Diabetes Research Center. Bowles is on several boards, including Morgan Stanley, General Motors and Facebook Inc.

Bowles' lecture is cosponsored by the Presidential Installation Planning Committee and the Committee on Lectures, which is funded by the Government of the Student Body. More information on ISU lectures is available at http://www.lectures.iastate.edu, or by calling 515-294-9935. 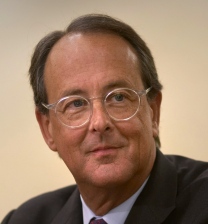 "A Conversation on the National Debt"

This fall, the American people deserve a serious national debate about our debt, not easy promises."