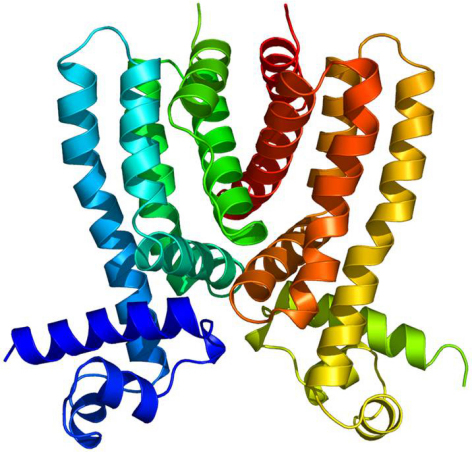 This ribbon diagram shows the crystal structure of the Rv3066 regulator that controls the expression of a pump that removes toxins from tuberculosis bacteria. Larger image. Image courtesy of Edward Yu.

Yu, an Iowa State University and Ames Laboratory researcher, has described in the journal Nature the three-part structure that allows E. coli bacteria to pump out toxins and resist antibiotics.

And now, in a paper published online by the journal Nucleic Acids Research, a research team led by Yu describes the structure of a regulator that controls the expression of the multidrug efflux pump in Mycobacterium tuberculosis.

Yu – a professor of physics and astronomy, of chemistry, of biochemistry, biophysics and molecular biology in Iowa State’s College of Liberal Arts and Sciences and an associate of the U.S. Department of Energy's Ames Laboratory – said the latest study is a starting point for a better understanding of how the tuberculosis bacterium is able to resist drugs.

The development of strains totally resistant to drugs “inspired us to move in this direction and try to understand the mechanism in developing drug resistance,” Yu said.

“It is obvious that the emergence of these drug-resistant TB strains has evolved into a major threat and challenges our global prospects for TB control,” Yu’s research team wrote in its latest paper. “Thus, knowledge of the molecular mechanisms underlying drug resistance in M. tuberculosis is essential for the development of new strategies to combat this disease.”

Yu’s research is currently supported by the National Institutes of Health. The researchers’ use of the Advanced Photon Source at Argonne National Laboratory in Argonne, Ill., was supported by the U.S. Department of Energy’s Office of Basic Energy Sciences.

Prior to Yu’s study, not much was known about the structure and function of the tuberculosis efflux pump regulator known as Rv3066.

That, in part, is because researchers have attributed drug resistance in tuberculosis to the bacterium’s very thick cell wall. That wall makes it very difficult to get drugs into the bacterium.

The researchers used X-ray crystallography (including X-ray beams produced by the Advanced Photon Source) to study the Rv3066 structure. They collected data showing the regulator when the toxic compound ethidium bromide was present and when it was not.

The data revealed an asymmetric, two-part molecule with a spiral structure. The structure is flexible, allowing the regulator to recognize and respond to multiple drugs. In the presence of ethidium, Yu’s group says the regulator responds with a rotational motion, inducing expression of the efflux pump that rids the bacterium of antimicrobial drugs.

Studying that structure and mechanism could make a difference in the fight against drug-resistant tuberculosis: “Elucidating the regulatory systems of multidrug efflux pumps in M. tuberculosis,” Yu and the researchers wrote in their paper, “should allow us to understand how this bacterium contributes to multidrug resistance and how it adapts to environmental changes.” 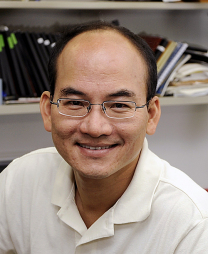 A research group led by Edward Yu of Iowa State University and the Ames Laboratory is beginning to study disease resistance in tuberculosis. The researchers started their TB studies by describing the structure of a regulator that controls the expression of a pump that removes toxins from the bacteria. The finding was recently published online by the journal Nucleic Acids Research.

“It is obvious that the emergence of these drug-resistant TB strains has evolved into a major threat and challenges our global prospects for TB control. Thus, knowledge of the molecular mechanisms underlying drug resistance in M. tuberculosis is essential for the development of new strategies to combat this disease.”