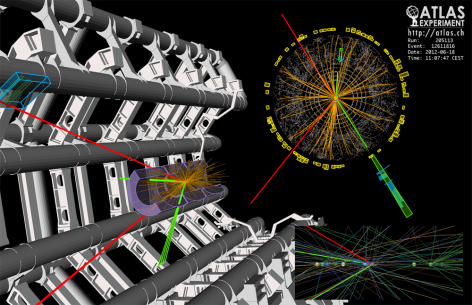 Data from the ATLAS Experiment at the Large Hadron Collider show the tracks of electrons (green) and their heavier cousins muons (red) during proton-proton collisions recorded on June 18, 2012. Physicists say the event could be evidence of the long-sought Higgs boson. Larger image. Image courtesy of ATLAS Experiment © 2012 CERN.

AMES, Iowa – Ten Iowa State University physicists have their names on a new paper describing how the ATLAS Experiment at the Large Hadron Collider has observed a new particle in the search for the Higgs boson.

Get the faculty leaders of Iowa State’s work with the ATLAS detector in a conference room and it’s clear they’re proud of the research described in that paper. After all, few expected a Higgs-like particle to be detected within three years of the collider’s restart in November 2009.

But, they’re also quick to say any future discoveries at the collider near Geneva, Switzerland, that’s operated by the European Organization for Nuclear Research (CERN) could be even more exciting.

"The most disappointing outcome, which is still quite exciting, would be if we find the Higgs and nothing else – we really do hope that we will find something beyond the Standard Model,” said Jim Cochran, a professor of physics and astronomy in the College of Liberal Arts and Sciences. “That would be an absolutely monumental discovery."

Soeren Prell, a professor of physics and astronomy, said the Standard Model of particle physics already tells physicists a lot about the Higgs, a subatomic particle theorized to be an excitation of a field that interacts with other particles, giving them their mass. The standard model of particles and their interactions, however, doesn’t tell physicists the mass of the Higgs boson.

The ATLAS physics paper explains that a particle with a mass of about 126 billion electron volts has been discovered at the Large Hadron Collider. The paper says the particle is “compatible with the production and decay of the Standard Model Higgs boson.”

Prell said there will be many more studies to determine just what the physicists have found. If it is the Higgs boson, physicists still have to collect more data and perform additional studies to measure its exact mass and confirm other properties.

“We want to emphasize the discovery of this Higgs-like particle is a huge achievement,” said Chunhui Chen, an assistant professor of physics and astronomy. “But we did expect that. In the future we will find even more interesting things.”

Those discoveries could include:

“This whole thing could really be getting into science fiction, things like hidden dimensions or a fourth generation of quarks and leptons,” said W. Thomas Meyer, a retired adjunct research professor of physics and astronomy. “I really think the next 10 to 20 years of high energy physics could be very exciting.”

As physicists and engineers upgrade the Large Hadron Collider and ramp it up to nearly full power of 7 trillion electron volts per beam of colliding protons or lead ions in late 2014 and early 2015, the Iowa State researchers expect more opportunities for new physics.

As the physics goes to higher energies, Iowa Staters are positioned to contribute to any discoveries at the Large Hadron Collider: Cochran will help manage United States operations of the ATLAS experiment; Prell is working with the software for the silicon pixel detector (the innermost part of the larger ATLAS detector); Chen just finished a one-year ATLAS fellowship at the U.S. Department of Energy’s Argonne National Laboratory in Argonne, Ill., and is developing new techniques to search for new physics; Meyer is giving talks and doing other work to explain the high energy physics at the collider; and Eli Rosenberg, an Iowa State professor of physics and astronomy, collaborated on the ATLAS project and is just finishing an assignment with the U.S. Department of Energy.

As part of their work with the Large Hadron Collider, Iowa State physicists are building collaborations at the Argonne and Brookhaven (Upton, N.Y.) national laboratories. The labs have tools and technologies that aren’t available at Iowa State while the university has students not available at the labs.

Without those collaborations, it’s difficult for students to get real experience in high energy physics experiments.

And it would be impossible for students and faculty to get their names on big physics papers such as “Observation of a new particle in the search for the Standard Model Higgs boson with the ATLAS detector at the LHC.”

Iowa State University physicists -- faculty, scientists, post-doctoral researchers, graduate students and undergraduates -- are contributing to the ATLAS Experiment at the Large Hadron Collider. They're part of the international effort to hunt down the Higgs boson and an explanation for how subatomic particles acquire their masses. They're looking forward to collecting more data about a new "Higgs-like" particle announced this summer. And they're excited about the possibility of discovering new physics as collider energies ramp up.

"The most disappointing outcome, which is still quite exciting, would be if we find the Higgs and nothing else – we really do hope that we will find something beyond the Standard Model. That would be an absolutely monumental discovery."

Jim Cochran, a professor of physics and astronomy

Iowa State physicists who have worked with the ATLAS Experiment at the Large Hadron Collider: