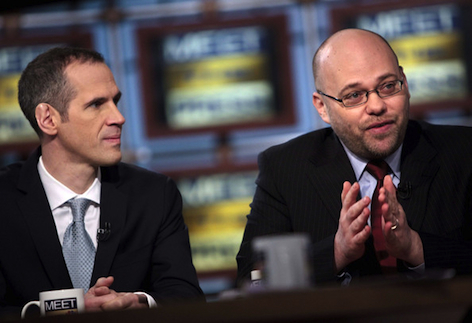 "Planet Money LIVE" will be at 8 p.m. Wednesday, Sept. 19, in the Memorial Union Great Hall. The presentation is part of the Greater Iowa Credit Union Business Lecture Series. It is free and open to the public.

A co-production of NPR and "This American Life," "Planet Money" helps listeners understand how dramatic economic change impacts their lives. The program uses substantive, intelligent economic reporting that is funny, engaging and accessible.

In 2008, Davidson and Blumberg co-reported and produced "The Giant Pool of Money," a documentary on the housing crisis that aired on "This American Life." The program was named one of the top ten works of journalism of the decade by the Arthur L. Carter Journalism Institute at New York University. Described as "riveting," the radio documentary won near universal praise (and Peabody, DuPont-Columbia and George Polk awards) as the clearest and most entertaining explanation of the roots of the financial crisis in any media.

Davidson and Blumberg took the lessons they learned crafting "The Giant Pool of Money" to create "Planet Money," which can be heard in two weekly podcasts and as a regular feature during NPR's "Morning Edition” and  "All Things Considered."

Blumberg is a contributing editor for "Planet Money," a producer for "This American Life" and an adjunct professor of journalism at Columbia University.

Davidson has served as NPR's international business and economics correspondent, and previously was Middle East correspondent for the Public Radio International program, "Marketplace." He also has written articles for The New York Times Magazine, Harper's, GQ, Rolling Stone and other magazines.

"Planet Money LIVE" is funded by the Greater Iowa Credit Union through the College of Business to serve as a springboard for conversation of relevant business topics and to attract, educate, and serve members of the Iowa State University and Ames community. The presentation is cosponsored by the Committee on Lectures, which is funded by the Government of the Student Body. More information on ISU lectures is available at http://www.lectures.iastate.edu, or by calling 515-294-9935.