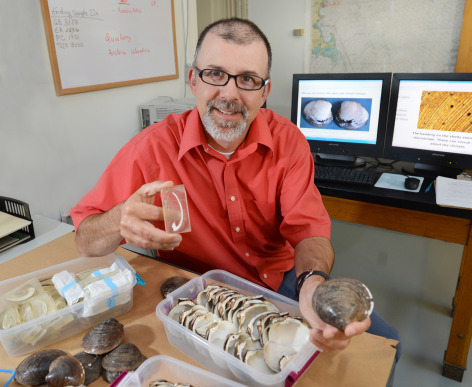 AMES, Iowa – Two Iowa State University graduate students are just back from the Gulf of Maine with another big catch of clam shells.

Shelly Griffin and Madelyn Mette recently boarded a lobster boat, dropped a scallop dredge into 30 meters of ocean water and pulled up load after load of Arctica islandica.

“These are the clams that end up in clam chowder,” said Alan Wanamaker, an assistant professor of geological and atmospheric sciences and the first David Morehouse Faculty Fellow in the College of Liberal Arts and Sciences. Wanamaker studies paleoclimatology, the variations and trends of past climates and environments, with the goal of better understanding future climate changes.

The Iowa State researchers only need a few live, meaty clams for their studies. They’re really after the old, dead shells. Off the coast of Maine, clams can live up to 240 years, year after year adding another band to their shells, just like a tree adds another growth ring. In the colder waters of the North Atlantic near Iceland, the clams can live up to 500 years, recording even more information in what scientists call annual shell increments. 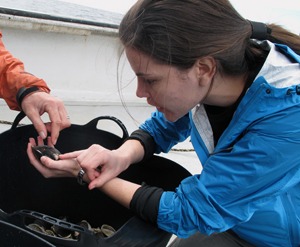 Shelly Griffin, an Iowa State University graduate student, examines a clam caught off the coast of Maine. She's working aboard a lobster boat with Karl Kreutz of the University of Maine. Larger photo. Photo courtesy of Alan Wanamaker.

It turns out those shell increments are a lot like sensors at the bottom of the ocean – they record long records of information about the ocean, including growing conditions, temperatures and circulation patterns.

A paper published by Nature Communications in June 2012 reported how Wanamaker (the lead author) and an international team of researchers used radiocarbon data from shells to determine when clams collected north of Iceland were living in “young” or “old” water. Young water had been at the surface more recently and probably came from the Atlantic. Old water had been removed from the surface much longer and probably came from the Arctic Ocean.

The paper reports warmer, younger water from the Gulf Stream during the warmer Medieval Climate Anomaly from about A.D. 950 to 1250. The paper also reports that shell data showed older, colder water during Europe’s Little Ice Age from about A.D. 1550 to 1850.

The researchers’ interpretation of the data says the Gulf Stream carrying warm water from the subtropical Atlantic was strong in the medieval era, weakened during the Little Ice Age and strengthened again after A.D. 1940. Those fluctuations amplified the relative warmth and coolness of the times.

Wanamaker said a better understanding of the ocean’s past can help researchers understand today’s climate trends and changes.

“Is the natural variability only that, or is it influenced by burning fossil fuels?” he said. “Maybe we can understand what will happen in the next 100 years if we understand oceans over the past 1,000 years.”

And so Wanamaker – a former high school science teacher in Maine whose fascination with climate change sent him back to graduate school – works with students to carefully collect, process and study clam shells.

The research is painstaking – the shell increments are measured in millionths of a meter and microscopes are required at the most important steps. And the tools are sophisticated – two mass spectrometers measure shell fragments for different isotopes of carbon and oxygen. (Isotopes are elements with varying numbers of neutrons. Heavier isotopes of oxygen in the shell material generally correspond to colder ocean temperatures.)

“Isotopes are just wonderful tracers in nature,” Wanamaker said, noting he also takes isotope measurements for research projects across campus and beyond.

When it comes to Wanamaker’s own work with clam shells, “In the broadest sense, we’re trying to add to our understanding of oceans over the last several thousand years,” he said. “We have a terrestrial record – we can get an excellent chronology from tree rings and there is a climate signal there. But that’s missing 70 percent of the planet.” 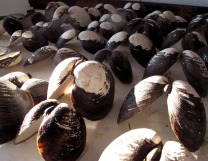 “Is the natural variability only that, or is it influenced by burning fossil fuels? Maybe we can understand what will happen in the next 100 years if we understand oceans over the past 1,000 years.”

Alan Wanamaker, an assistant professor of geological and atmospheric sciences