Iowa State researchers double down on heat to break up cellulose, produce fuels and power 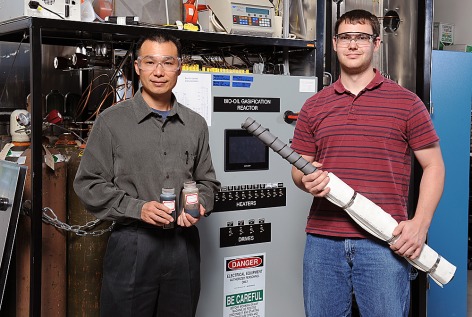 Iowa State University engineers Song-Charng Kong, left, and Nicholas Creager are studying a new bio-oil gasifier. Kong is holding samples of bio-oil that can be vaporized by the machine. Creager is holding the system's reactor, which can operate at temperatures exceeding 1,800 degrees Fahrenheit. Larger photo. Photo by Bob Elbert.

AMES, Iowa – Nicholas Creager recently pointed to the nuts and bolts of one of Iowa State University’s latest biofuel machines.

The 6-inch diameter, stainless steel pipe is the pressure vessel, which is essential for the system’s operation, said Creager, a doctoral student in mechanical engineering and biorenewable resources and technology. It’s a little over three feet long and about a foot across. It can contain pressures up to 700 pounds per square inch.

Then Creager picked up a dark gray pipe that’s a few inches across, is wrapped in insulation and fits inside the pressure vessel. It’s the system’s reactor. It’s made of silicon carbide and can operate at temperatures exceeding 1,800 degrees Fahrenheit.

Next was a finger-sized nozzle that mixes bio-oil with oxygen and sprays it into the top of the reactor.

Iowa State's new bio-oil gasifier uses heat and pressure to convert bio-oil into a synthesis gas that can be used to make transportation and boiler fuels. Larger photo. Photo by Bob Elbert.

Add a bunch of toggle switches, electronics, pipes, a sturdy frame and some very thick bolts and you have a bio-oil gasifier. It will allow Iowa State researchers to combine two thermochemical technologies to produce the next generation of fuels from renewable resources such as corn stalks and wood chips.

First, biomass is fed into a fast pyrolysis machine where it’s quickly heated without oxygen. The end product is a thick, brown oil that can be divided and further processed into fuels. Researchers sometimes describe bio-oil as densified biomass that’s much easier to handle and transport than raw biomass.

Second, the bio-oil is sprayed into the top of the gasifier where heat and pressure vaporize it to produce a combination of (mostly) hydrogen and carbon monoxide that’s called synthesis gas.

That gas can be processed into transportation fuels. It can also be used as boiler fuel to create the steam that turns turbines to produce electricity.

“We hope to be able to use cellulosic biomass as opposed to using corn grain for the production of fuels,” said Robert C. Brown, the director of Iowa State’s Bioeconomy Institute, an Anson Marston Distinguished Professor in Engineering and the Gary and Donna Hoover Chair in Mechanical Engineering. “This helps us move toward cellulosic biofuels.”

Brown said researchers have yet to perfect ways to biologically break down plant cellulose to get at the sugars that are converted to fuels. And so the Iowa State researchers are turning to nature’s solution.

The bio-oil gasifier has been fully operational since June and has been converting bio-oil made from pine wood into synthesis gas. As the project moves beyond its startup phase, researchers will use bio-oil produced by Iowa State researchers and fast pyrolysis equipment.

The gasifier was built as part of a two-year, nearly $1 million grant from the U.S. Department of Energy. Another three-year, $450,000 grant from the Iowa Energy Center will allow researchers to study and refine bio-oil gasification.

Song-Charng Kong, an associate professor of mechanical engineering who’s leading the latter project, will build a computer simulation model of bio-oil gasification. The model will take into account changes in temperature, pressure and biomass. It will allow researchers to understand, predict and ultimately improve the gasification process.

The project will also develop a systems simulation tool that allows researchers to examine the technical, economic and big picture implications of bio-oil gasification. And finally, the project will develop a virtual reality model of a full-size plant that will allow researchers to see, study and improve a plant before construction crews are ever hired.

“The physics and chemistry will be behind all these models and images,” Kong said. “This is a very new area to study. We can use these models as a tool to understand what will happen as this technology is scaled up.”

Contributing to the systems and virtual reality models are Guiping Hu, an assistant professor of industrial and manufacturing systems engineering, and  Eliot Winer, an associate professor of mechanical engineering and associate director of the Virtual Reality Applications Center.

The ultimate goal of all the modeling and testing is to develop a new biorenewables landscape for Iowa and the country. The Iowa State idea calls for biomass to be transported to small, local fast pyrolysis plants that would convert crop biomass into liquid bio-oil. The bio-oil would be easily transported to bigger, regional facilities where it could be gasified and processed into transportation and boiler fuels.

One place to start building that vision is the high bay facility on the north side of Iowa State’s Biorenewables Research Laboratory. On a recent morning, Creager was there putting the bio-oil gasifier back together after completing some gasification trials. He planned to run the gasifier at higher pressures later that week, which is required for efficient fuel synthesis.

Once the machine is fully tested and operating at full speed, Creager said it could continuously gasify nearly 4.5 pounds of bio-oil an hour.

That’s enough to help researchers understand how the technology could one day contribute to an advanced bioeconomy. 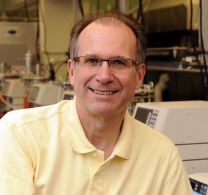 Iowa State University engineers and researchers have built and are testing a bio-oil gasifier. It will allow them to combine two thermochemical technologies to produce the next generation of fuels from renewable sources such as corn stalks and wood chips.

“We hope to be able to use cellulosic biomass as opposed to using corn grain for the production of fuels. “This helps us move toward cellulosic biofuels.”