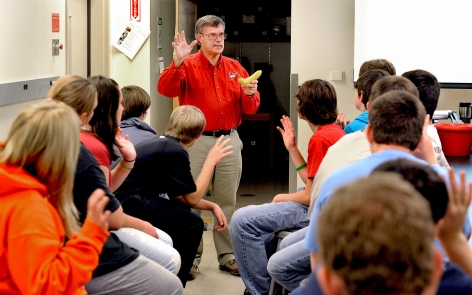 Mike Zeller of the ISU Biotechnology Outreach Education Center leads a group of students in an experiment designed to extract DNA from a banana. Larger photo. Photo by Robert Elbert.

AMES, Iowa – For Mike Zeller, there’s nothing optional about science. By his estimation, today’s students will enter a workforce and a society increasingly reliant on technology and an understanding of scientific principles.

“Maybe 10 percent of kids in school will make a career out of science, but 100 percent of them need to know about science,” Zeller said.

After 24 years as a high school science teacher, Zeller decided to find new ways to show kids that science isn’t just textbooks and vocabulary words. So he became the biotechnology outreach education coordinator for the ISU Office of Biotechnology in 1997. In that capacity, he and the biotechnology outreach program secretary Lori Miller have helped to show thousands of teachers and students from kindergarten to community college that science is an exciting field where world-changing breakthroughs are occurring faster than ever. By the end of the year, Zeller said the outreach program will have worked with more than 250,000 students in its history.

Zeller’s efforts to promote science in the classroom are getting him noticed. During a ceremony this month on campus, the Iowa Academy of Science recognized both Zeller and the Biotechnology Outreach Education Center with its Friend of Science Award for contributions to science education.

The ISU Biotech Outreach Education Center hosts four-day courses for science teachers during which participants learn how to teach various experiments to students to illustrate important scientific concepts. After completing the workshops, teachers gain access to free supplies to teach the same experiments to their students.  Zeller also provides pre-service biotechnology experiences for ISU students preparing to be teachers of science, agriculture, or family and consumer sciences.

In addition to the teacher workshops, Zeller spends much of his time in classrooms on campus and across the state working directly with K-12 students. The outreach programs feature hands-on laboratory experiences that cover biology, chemistry, genetics and other important scientific subjects.

On a recent Thursday morning in a lab on campus, Zeller led a group of around 25 West Des Moines sixth graders in an experiment that uses DNA analysis in a simulated crime scene investigation. It’s a scenario straight out of some of the most popular television crime dramas – except Zeller’s experiment tasks the students with figuring out which one of four dogs chewed up its master’s boot. The students have to use lab equipment such as pipettors to compare DNA extracted from fur found at the “crime scene” with DNA samples from each of the four dogs.

The students can’t accuse any of the dogs until they have airtight genetic evidence. To do otherwise would be “dog profiling, and that’s illegal,” Zeller said during his presentation.

Zeller said an experiment in which students extract DNA from bananas using shampoo also is among the most popular activities featured during the workshops. After completing the experiment, students then turn the bananas into smoothies.

It’s all about getting students excited about science, he said.

“In many ways, biology used to be considered a boring science by a lot of students,” Zeller said. “Now, with biotechnology, we’re discovering new applications all the time in fields like genetics and agriculture. There are a lot of new jobs in biotechnology, and it’s having an impact on people every single day. It’s an exciting science.”

The ISU Biotechnology Outreach Education Center recently received the Friend of Science Award from the Iowa Academy of Science for contributions to science education. The center has worked with thousands of teachers and around 250,000 Iowa students to promote science in the classroom.

“In many ways, biology used to be considered a boring science by a lot of students.  Now, with biotechnology, we’re discovering new applications all the time in fields like genetics and agriculture. There are a lot of new jobs in biotechnology, and it’s having an impact on people every single day. It’s an exciting science.”