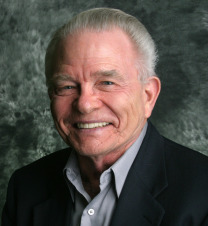 AMES, Iowa – Tom Barton, a chemist with long ties to Iowa State University and the U.S. Department of Energy’s Ames Laboratory, has been elected president-elect of the American Chemical Society.

The American Chemical Society (ACS) has more than 164,000 members and is the world’s largest scientific society.

And why does he want to lead the ACS? These, after all, are difficult times for chemistry. Jobs are being outsourced, unemployment of chemists is high, research funding is uncertain and young people are less interested in the field. The ACS has developed plans and strategies to address those issues.

“However,” Barton wrote on his candidate website, “plans remain only words unless there is leadership who passionately believes in our mission, and has the background, talents, capabilities and time available to lead the effort to carry out these strategies, to sell these strategies and to energize the membership of ACS to carry them out with zeal.”

Barton said his priorities will be improving elementary and secondary science education in America, boosting the public’s appreciation of chemistry and addressing employment and globalization issues.

About American education, he said, “Everybody knows that in K-12 we’re not doing a good job in science, technology, engineering and math. We have more conferences and special reports but still do little or nothing. We need drastic changes. I hope this new bully pulpit of mine will add to the efforts in getting this done.”

Barton, who’s not shy about sharing an opinion or telling a story (he’s even writing some fiction these days), said it’s purely an accident that he’s a chemist.

He started college on a music scholarship – half voice and half clarinet – and was asked to pick a science class to meet his degree requirements. When a college official tried to steer him away from a chemistry class for science students, Barton rose to the challenge and took the harder course.

“The next thing you know I had a Ph.D. in chemistry,” he said.

And now, instead of settling into retirement, he’s preparing to advance chemistry and meet the changing needs of chemists.

“While the ACS president is only one person,” Barton wrote on his website, “an energetic, experienced president can lead by coordinating the effort of 164,000 bright, well-educated members and their collective wisdom to take us into the future.”

Tom Barton of Iowa State University and the Ames Laboratory has been elected president-elect of the American Chemical Society, the world's largest scientific society. He will be president-elect in 2013, president in 2014 and immediate past-president in 2015. Among his leadership priorities is improving elementary and secondary science education in America.

“While the ACS president is only one person, an energetic, experienced president can lead by coordinating the effort of 164,000 bright, well-educated members and their collective wisdom to take us into the future.”