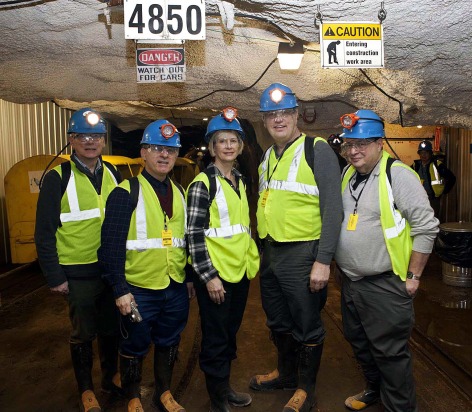 Iowa State University’s Eli Rosenberg, far right, and other physics leaders work 4,850 feet below the surface at the Homestake Mine in Lead, S.D. Larger photo. Photo contributed by Eli Rosenberg.

AMES, Iowa – Eli Rosenberg is back in his Iowa State University office, papers and books spread across his desk, an inbox full of requests for assistance, stories and photos from four years of national physics work at the ready.

Rosenberg, a professor (and former chair) of physics and astronomy, is back on campus after four years with the High Energy Physics Program within the U.S. Department of Energy’s Office of Science. He moved out of the Zaffarano Physics Addition to Department of Energy offices in Germantown, Md., as part of a temporary assignment with the agency.

“They asked me if I was interested,” said Rosenberg, a veteran of collider physics work with the BaBar Experiment at the SLAC National Accelerator Laboratory in California and the ATLAS Experiment at the Large Hadron Collider in Europe. “I could bring in outside expertise and offer advice.”

Who better to prepare fact sheets and presentations for Congress than a professor with a long history of teaching freshmen physics students?

“We always have to respond to questions justifying the science,” Rosenberg said. “We spend a lot of time explaining the science.”

Rosenberg also helped coordinate the panels that selected the country’s top early career physicists for research awards as high as $500,000 per year for five years. He worked with the QuarkNet education program. He helped manage Department of Energy research grants. (And, when he could get away, a professor famous for his physics-of-baseball lectures spent a few hours with the Nationals and the Orioles.)

But mostly, he helped manage the proposed Long Baseline Neutrino Experiment. The experiment aims to shoot a beam packed with neutrinos 800 miles from the Fermi National Accelerator Laboratory in Batavia, Ill., to the Homestake Mine in Lead, S.D. The underground beam would cut across the northern quarter of Iowa, roughly from Dubuque to Mason City to the northwest corner of the state.

If and when the experiment is turned on, Iowans are never going to notice all those neutrinos racing at nearly light speed. That’s because neutrinos – even though they’re among the most abundant subatomic particles in the universe – usually race through matter without leaving a trace.

The experiment would shoot the neutrinos at a massive detector that will measure how they change over time and space. The resulting data could help physicists understand why the universe is dominated by matter – even though the universe should have started with equal parts matter and antimatter.

As originally planned, the experiment was expected to cost $1.5 billion to $2 billion. But budget cuts put the project in peril. And so researchers broke the project into phases that will be completed over several years. Phase I would have a price tag of about $800 million.

As program manager for the project, Rosenberg was part of the activity that kept the proposed experiment alive.

(Mayly Sanchez, an Iowa State assistant professor of physics and astronomy with a joint appointment at the U.S. Department of Energy’s Argonne National Laboratory in Illinois, has also been involved with the long baseline experiment and other ongoing neutrino projects.)

Now that he’s back on campus, Rosenberg is thinking about what’s next in his physics career.

He could return to his previous work with particle colliders and the hunt for the Higgs boson. Or, he could continue his neutrino work of the past few years. That work has taken him to experiments in Japan, China and 4,850 feet below ground in a former South Dakota gold mine – and he’s happy to share photos from all those physics adventures.

The pictures show Rosenberg really has had a front row view of the country’s physics future.

Eli Rosenberg is back on campus after four years of helping to manage the country's high-energy physics programs. His temporary assignment with the Department of Energy gave Rosenberg a great view of America's physics future. It also helped him learn new lessons in neutrino physics.

From the Appreciation Award presented to Eli Rosenberg by William Brinkman, the director of the U.S. Department of Energy’s Office of Science: