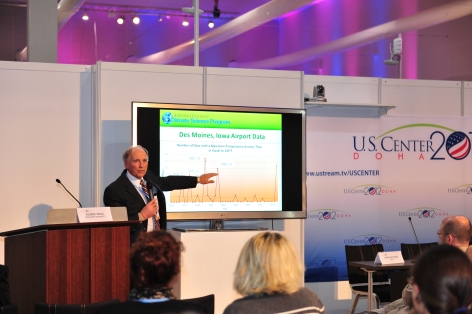 And, although scientists can’t attribute the 2012 drought to climate change, the data suggest that such extreme weather events are becoming more common in the Midwestern United States, said Gene Takle, an ISU professor of agronomy and geological and atmospheric sciences.

During a U.N. climate summit in Doha, Qatar, Takle cited specific trends in Iowa agriculture that have arisen due to changing conditions in the climate. For instance, he said the growing season in Iowa has lengthened over the course of the previous decades, prompting some farmers to choose seed hybrids that take longer to mature but produce greater yields.

Takle, who is the director of the climate science program at Iowa State, said precipitation has tended to be more plentiful in the first half of the growing season than the later half, meaning farmers can take advantage of the resulting abundance of groundwater to plant seeds more densely than in the past. He said seed density for corn has climbed to about 35,000 seeds per acre from about 20,000 seeds per acre 30 years ago. That higher density also produces greater yields, he said.

Changes in climate also can influence the kind of machinery farmers may decide to use, he said. The trend toward rainy weather early in the growing season reduces the number of days available for farmers to plant in the spring, Takle said. That makes owning large planters, which cover more rows in less time, a more attractive option.

On balance, most of the environmental shifts that can be attributed to climate change have proven beneficial for Iowa farmers, Takle said. But that doesn’t mean Iowa farmers aren’t susceptible to extreme swings in weather, as this year’s drought indicates.

“You can’t pin specific events to climate change, but this drought sort of fits a pattern of wider fluctuation in precipitation,” Takle said. “This kind of event is going to be more frequent in the future.”

The U.N. conference gave Takle a chance to show an international audience the impact climate change has had on U.S. agriculture. Takle spent four days at the climate talks and was invited because of his previous work with the U.S. Department of Agriculture’s Office of the Chief Economist. Takle said he is currently working with USDA personnel to prepare a congressionally mandated assessment of the impact climate change has on agriculture.

“While our production numbers in recent years and projections for the near future seem relatively secure, the drought of 2012 was an indication that U.S. agriculture can be vulnerable to extreme events,” he said.

Takle said he’s working to give farmers greater clarity about how the climate impacts their operations. Doing so will make them more productive while protecting food security and safeguarding natural resources, he said.

“We’re trying to develop research that sheds light on the science and improves decision making for producers,” he said. “That applies to a variety of timetables as well. This isn’t just about the distant future.”

An ISU climate science expert presenting data before a United Nations conference last week said that climate change is influencing Iowa farmers to adjust their operations. And, although scientists can’t attribute the 2012 drought to climate change, the data suggest that such extreme weather events are becoming more common in the Midwestern United States.

“You can’t pin specific events to climate change, but this drought sort of fits a pattern of wider fluctuation in precipitation. This kind of event is going to be more frequent in the future.”

Gene Takle, professor of agronomy and geological and atmospheric sciences