AMES, Iowa -- On April 9, 2011, the lives of 1,224 residents in Mapleton, Iowa, were changed forever. That evening, a Category 3 tornado with winds up to 165 mph damaged more than half of the community.

The tornado damaged 60 percent of the town, destroying 46 homes and 21 businesses and hundreds of maple trees, for which the town is named. Also severely damaged were grain bins at the Mapleton Grain Company. The dearth of trees on the west side of town and the mangled grain bins are stark reminders of the disaster.

On a recent Sunday in December, Mapleton residents had the opportunity to visualize the possibilities for changing their lives again — this time for the better — during an open house hosted by the Iowa State University landscape architecture community design studio and the Mapleton Rebuild and Recover Committee. 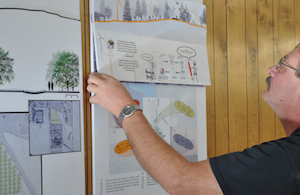 The open house was the capstone of a semester-long project aimed at working with the Mapleton Rebuild and Recover Committee and Foundation to identify landscape-based strategies for Mapleton’s long-term recovery. Julia Badenhope, associate professor of landscape architecture, and Tim Keller, professor of landscape architecture, co-teach the community design studio, which has addressed disaster recovery in several Iowa communities, including Elkader, which was damaged by flooding in 2008, and the Lake Delhi area, which was flooded when the Lake Delhi Dam was breached in 2011.

“The reason we pursued this project for the capstone design studio was twofold," Badenhope said. "First and foremost we wanted to help the residents of Mapleton understand opportunities to reinvent Mapleton, and second to encourage our next generation of practitioners to apply their design skills to solve the problems of their time.

"It’s risky and personally very challenging to go outside the established modes of practice and tackle a problem that is much bigger than you ever imagined,” she said.

To best understand the needs and wants of residents, the students visited Mapleton twice to conduct focus groups, interviews, mapping exercises and a collage study. The class also set up a website and posted regular updates on their progress as they began to develop designs. Residents, including those who took part in the participatory activities, were able to comment on the developing design and provide feedback to students before the final presentation.

"It’s going to take a while for all [the ideas] to be absorbed because we’re still in recovery mode; we’re still feeling a little war torn since the tornado,” said Marie Whiteing, chair of the Mapleton Rebuild and Recover Committee. “But we’re hearing a lot more people talk about it because they’ve been to the website. The website has been really helpful. People are looking at these designs and starting to see the possibilities, and it’s causing a lot of conversation, and that’s what we need to begin with.”

Based on the information gathered from residents, the class developed a series of project proposals that addressed community infrastructure, renewable energy, recycling existing resources and new uses for open spaces — including those created by the tornado. The students created presentation boards to illustrate each of their proposals, as well as a PowerPoint presentation and a written handbook. These will allow the Mapleton Rebuild and Recover committee to use the website to  fundraise and communicate accomplishments as they move forward.Open house for residents.

Forty residents attended the open house and completed a brief questionnaire indicating what they would like most for Mapleton and which of the proposed projects they preferred. Some ideas that were popular among attendees included recreation trails, the downtown streetscape enhancements, storm water management strategies and repurposing the damaged grain bins in a new community park.

According to Badenhope, residents appreciated the students’ efforts and were impressed with the ideas put forward.

“So much thought has gone into each concept it makes it almost impossible to choose,” said JoAnn Nielsen, Rebuild and Recover committee member. “They all have such wonderful points to make and different ways to bring our town back together.”

“I’m speaking for the entire town of Mapleton when I say that we really appreciate that our town was selected as a community looking at improvements,” said Lawrence Nelson, long-time resident and former principal of the Maple Valley Elementary and Junior High School.

Although the community design studio has been completed, the revitalization process for Mapleton is just beginning.

“The designs we produced are not intended as final solutions, but serve as a decision-making tool for residents to use to look beyond the trauma of the tornado and see the opportunities that have been created for them,” said Badenhope.

“Moving forward, private sector landscape architects and others will need to become involved as consultants as the community finalizes its decisions and begins building the projects,” she added.

A 2011 Category 3 tornado damaged 60 percent of Mapleton, Iowa. On a recent Sunday in December,  residents had the opportunity to visualize the possibilities for reinventing the town during an open house hosted by the Iowa State University landscape architecture community design studio and the Mapleton Rebuild and Recover Committee. The open house was the capstone of a semester-long project to identify landscape-based strategies for Mapleton’s long-term recovery. 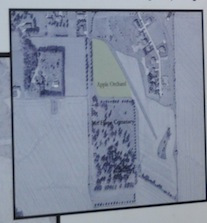 'So much thought has gone into each concept it makes it almost impossible to choose. They all have such wonderful points to make and different ways to bring our town back together.””