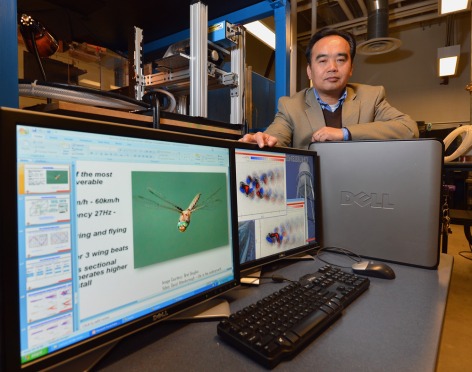 AMES, Iowa – Ever since the Wright brothers, engineers have been working to develop bigger and better flying machines that maximize lift while minimizing drag.

There has always been a need to efficiently carry more people and more cargo. And so the science and engineering of getting large aircraft off the ground is very well understood.

But what about flight at a small scale? Say the scale of a dragonfly, a bird or a bat?

Hui Hu, an Iowa State University associate professor of aerospace engineering, said there hasn’t been a need to understand the airflow, the eddies and the spinning vortices created by flapping wings and so there haven’t been many engineering studies of small-scale flight. But that’s changing.

The U.S. Air Force, for example, is interested in insect-sized nano-air vehicles or bird-sized micro-air vehicles. The vehicles could fly microphones, cameras, sensors, transmitters and even tiny weapons right through a terrorist’s doorway.

So how do you design a little flier that’s fast and agile as a house fly?

Hu says a good place to start is nature itself.

Hui Hu and Zhenyu Wang, a doctoral student in aerospace engineering, work at an Iowa State wind tunnel with a model of a biological wing. Larger photo. Photo by Bob Elbert.

And so for a few years he’s been using wind tunnel tests and imaging technologies to learn why dragonflies and bats are such effective fliers. How, for example, do flapping frequency, flight speed and wing angle affect the lift and thrust of a flapping wing?

Hu’s studies of bio-inspired aerodynamic designs began in 2008 when he spent the summer on a faculty fellowship at the Air Force Research Laboratory at Eglin Air Force Base in Florida. Over the years he’s published papers describing aerodynamic performance of different kinds of flapping wings.

A study based on the dragonfly, for example, found the uneven, sawtooth surface of the insect’s wing performed better than a smooth airfoil in the slow-speed, high-drag conditions of small-scale flight. Using particle image velocimetry – an imaging technique that uses lasers and cameras to measure and record flows – Hu found the corrugated wing created tiny air cushions that kept oncoming airflow attached to the wing’s surface. That stable airflow helped boost performance in the challenging flight conditions. By describing the underlying physics of dragonfly flight, Hu and Jeffery Murphy, a former Iowa State graduate student, won a 2009 Best Paper Award in applied aerodynamics from the American Institute of Aeronautics and Astronautics.

And what about building tiny flying machines that use flapping wings? Can engineers come up with a reliable way to make that work?

Hu has been looking into that, too.

He’s using piezoelectrics, materials that bend when subjected to an electric current, to create flapping movements. That way flapping depends on feeding current to a material, rather than relying on a motor, gears and other moving parts.

Hu has also used his wind tunnel and imaging tests to study how pairs of flapping wings work together – just like they do on a dragonfly. He learned wings flapping out of sync (one wing up while the second is down) created more thrust. And tandem wings working side by side, rather than top to bottom, maximize thrust and lift.

Hu said these kinds of physics and aerodynamics lessons – and many more – need to be learned before engineers can design effective nano- and micro-scale vehicles.

And so he’s getting students immersed in the studies.

“We’re just now learning what makes a dragonfly work,” Hu said. “There was no need to understand flight at these small scales. But now the Defense Advanced Research Projects Agency and the Air Force say there is a need and so there’s an effort to work on it. We’re figuring out many, many interesting things we didn’t know before.”

Iowa State University's Hui Hu is using wind tunnel and imaging tests to learn the aerodynamics that allow dragonflies and bats to get off the ground in the slow-speed, high-drag conditions of small-scale flight. His findings could one day help military engineers build micro-air vehicles with the power and agility to carry cameras, sensors or even weapons into dangerous territory.

“We’re just now learning what makes a dragonfly work. There was no need to understand flight at these small scales. But now the Defense Advanced Research Projects Agency and the Air Force say there is a need and so there’s an effort to work on it. We’re figuring out many, many interesting things we didn’t know before.”