An associate professor of educational leadership and policy studies at Iowa State, Brooks is author of "The Dark Side of School Reform: Teaching in the Space between Reality and Utopia" (Rowman and Littlefield Education). For the book, Brooks conducted an in-depth case study at a high school for two years, interviewing and observing teachers and administrators on the effects, consequences and benefits of reform. He followed that study with over a decade's worth of similar research.

Brooks found that while the reform efforts are nearly always well-intentioned and designed to improve educational processes and outcomes, too often they actually distract teachers from teaching rather than help them to improve their practice.

"Dark Side was about how teachers experience alienation, even in a high-performing school, because school reforms ask teachers to do so many things that have nothing to do with teaching," said Brooks. "Reforms can accelerate a sense of burnout and alienation among teachers and administrators, especially when they have no hand in making important decisions that impact their day-to-day work.

"Teachers are increasingly involved in reforms related to a host of whole school and even whole district aspects of education. They are increasingly asked to perform many duties that are traditionally the domain of administrators," he continued. "And there are often a mountain of forms they have to fill out, new initiatives coming from the state, district and building levels, reforms layered on top of each other, and always new tests. Teacher and administrator professionalism is increasingly constrained, too. They have to be creative within this little box."

"I'm always pleased when education is part of the public debate and people are interested in schools. Since there is no single best way to teach or lead, it is healthy for students and for the system as a whole when we ask important questions about the quality and effectiveness of our educational system," he said. "That said, I worry about the direction some of these reforms are taking."

One such reform is alternative teacher certification, which Brooks questions when there are already so many certified teachers who haven't found jobs within the profession.

"It seems like a misguided policy to invest in alternative certification when we have more unemployed, highly-qualified teachers than at any time in the nation's history," he said. "We might instead think about how to recruit and retain the teachers to high-need urban and rural areas of the country where they are desperately needed.

"The evidence is clear that pedagogy matters -- knowing how to teach is at least as important as content knowledge," Brooks said. "But I am glad we're raising questions like 'What is a high quality education and educator?' 'And what does a great school look like?'"

Brooks says Iowa has unique educational challenges and opportunities because of its more rural landscape. Since much of the nation's educational policy is built around urban school issues, states such as California, Texas, Florida, New York and Illinois often drive policies adopted in states like Iowa, he added.

Brooks isn't surprised to see reform plans being greeted with mixed reviews within schools. He's found that to be inherent in the reform process.

"There are several reasons school reform is difficult," he said. "First, schools are by nature filled with very smart people who are also, generally speaking, very passionate about what they do. Second, schools are multi-level bureaucracies and we don't often take time to involve people in the big decisions; some people have a voice and others don't. Third, there is no 'one great way' to teach or lead in schools. The best reforms are research-based but implemented by creative educators who understand the local community."

"One of the issues you have that always creates that friction is the fact that by the legal structure of the United States, the state is actually the most important policymaker in this country, and so there's a lot of authority there -- meaning every reform gets implemented in a unique way from state-to-state," he said. 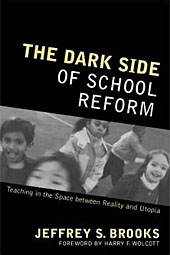 Education reform is a top 2012 legislative priority in several states and Iowa State's Jeffrey Brooks has studied how reform plays out within schools. An associate professor of educational leadership and policy studies, Brooks is author of "The Dark Side of School Reform: Teaching in the Space between Reality and Utopia." He has conducted over a decade's worth of research on the effects, consequences and benefits of reform.

"Dark Side was about how teachers experience alienation, even in a high-performing school, because school reforms ask teachers to do so many things that have nothing to do with teaching. Reforms can accelerate a sense of burnout and alienation among teachers and administrators, especially when they have no hand in making important decisions that impact their day-to-day work."