AMES, Iowa - Dakota Hoben and Jared Knight were clear during their inauguration as president and vice president (respectively) of Iowa State University's Government of the Student Body (GSB) last spring. While GSB has been working to increase the university's financial literacy offerings, they wanted to have students take the debt management fight directly to their fellow students through the launch of a peer-to-peer mentoring program.

The result: CyGold, a student organization focused on financial literacy peer education, was born. The group was founded last fall and should begin making presentations in residence halls, fraternities and sororities later this spring.

While Hoben and Knight are pleased that the average debt for last spring's graduates fell below $30,000 for the first time in six years to $29,455, they hope to see that number continue to fall. And they see CyGold as being an important first step.

"You know, GSB and the university have been trying to align everything [financial literacy offerings] with curbing student debt," Knight said. "And while the Financial Counseling Clinic, the Office of Student Financial Aid and the Accounts Receivable Office have been doing some programming, we've never had a peer group that's actually gone out and talked to students where they live. It's previously been a matter of students already getting into [debt] trouble and then getting help, instead of this preventative thing."

"The peer-to-peer effort isn't a new idea. I think we're just finally getting to the implementation stage," Hoben said. "So there's been a lot of work that was done before us to get these pieces aligned. But it's good to have that physical club and a group of people actually working on this and a presentation. That's the exciting part of it." 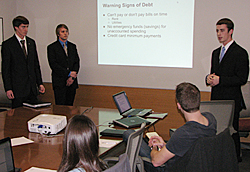 Cabinet members provided CyGold members feedback that will be used to tweak their presentation. They hope to go live with it over the rest of the semester, and they have some groups interested in hearing it.

"I've contacted both the IFC (Interfraternity Council) and the CPC (Collegiate Panhellenic Council) presidents, and they've expressed interest in the group and spreading the word around their chapters," said Gregory Hunt, CyGold president and a freshman GSB senator. "I've also heard from other fraternity and sorority leaders, and maybe five or six community advisors within Friley Hall, which is where I live. And right now, I'm trying to establish contact with some other hall directors and get the word out to some other community advisors to see if they'd be interested in having us present at a hall meeting."

What they'll present is information that was developed in harmony with Iowa State's Office of Student Financial Aid.

"The students have taken all the information that we've talked about and that I've given them, and they put it into one giant PowerPoint," said Jennifer Schroeder, an enrollment services adviser for financial aid who advises CyGold. "And their intention is that based on the request that they get, they're going to use components of the presentation to address those specific topics. I think they're planning on about half an hour for each individual presentation."

Schroeder says there are plans to expand CyGold's visibility through a greater web presence and a Facebook page. They'll also have a specific CyGold email address that students can use to request a session. Right now, the CyGold president is receiving all requests through his personal email account.

CyGold's Hunt also has ideas of how the program may expand over the course of his four years on campus, too.

"I guess my supreme goal -- the dream that is in my head right now -- is to eventually get to the level of an academic tutor, but instead of academics, you're teaching financial literacy instead," Hunt said. "That is the prime goal of that peer-to-peer interaction."

Hoben would also like to see CyGold eventually work in tandem with ISU's Financial Counseling Clinic, but offer a different kind of service.

"The counseling service is important, but those are the students who are kind of at the point of no return and already in trouble," Hoben said. "So this is going to focus more on the preventative side and the education side, and I think that's important."

"The counseling service is important, but those are the students who are kind of at the point of no return and already in trouble. So this is going to focus more on the preventative side and the education side, and I think that's important."