AMES, Iowa -- From humble beginnings as a small show in a classroom that hosted only close friends and family, the Iowa State University Textiles and Clothing Fashion Show has grown over its 30 years, now drawing nearly 2,500 guests annually. This year's 30th annual show will take place on Saturday, April 14, at 7 p.m. in Iowa State's Stephens Auditorium.

The Fashion Show showcases student designs in various categories such as street wear, special occasion, eco-friendly, menswear and senior lines. Student models wearing over 100 designs will walk the runway, with a separate exhibition for displayed entries available for viewing prior to the show at 6 p.m.

In addition to student designs, this year's show will feature a menswear line by guest designer and Iowa State alumnus Todd Snyder (left). The former vice president of Menswear Design for J.Crew and co-founder of Tailgate Clothing, Co., Snyder has now launched his own self-titled collection. It was named standout collection at this year's Fashion Week by GQ Magazine.

Snyder was recently announced by the Council of Fashion Designers of America as a nominee for its Swarovski Award for Menswear Design, which will be awarded on June 4. He was also the 2008 guest designer for The Fashion Show, which has featured other notable Iowa State alumni from companies such as J. Crew, Marc Jacobs and Target.

Industry professionals are also recruited each year to assist in judging and awarding the original designs created by students. This year's judges include Basia Szkutnicka, Study Abroad director/design lecturer for the London College of Fashion; Lindsay Hillard-Driscoll, Iowa State alumnus and freelance stylist with Balan Inc.; Emily Hall, designer for American Eagle Kids in New York; and Dana Bohlen, senior technical designer at Target. Judging will take place on Saturday, March 24, with winners announced at the end of the show in April.

Tickets may be purchased in advance at the Iowa State Center Ticket Office or through any Ticketmaster outlet. Tickets are $16 for Iowa State University students (with an ISU student I.D.) as well as children ages 12 and under. Adult tickets are $22, with a discount for groups of six or more. 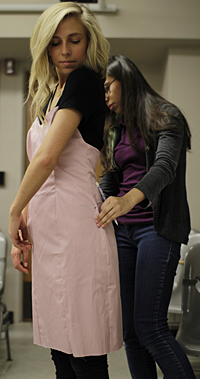 As part of The Fashion Show, ISU organizers are also planning Fashion Week festivities leading up to the show from Monday, April 9 to Friday, April 13. This year's events include:

Additional information on The Fashion Show is available online.

Since 1982, Iowa State students have been displaying their technical design, sewing and creative skills through The Fashion Show. It is now the largest student-produced fashion show in the country.