AMES, Iowa - Tom Schrier's first high school job was working at a local amusement park in Thorntown, Ind. He loved the experience so much that he now studies amusement/theme parks as an assistant professor of apparel, events, and hospitality management at Iowa State University.

Schrier is currently working on a multi-year study exploring how new attractions influence attendance rates at amusement/theme parks. Through the first two years, he's collected data from 16 parks, including such well known parks as Cedar Point in Sandusky, Ohio; Disneyland and Knott's Berry Farm, both in Anaheim, Calif.

His preliminary analysis shows that new attractions may be worth the investment in terms of attendance at the large destination parks, but not necessarily regional parks, such as Des Moines' Adventureland.

"It sort of depends a little on the market itself, but the overall trend shows that yes, a large investment does bring in larger amounts of attendance," Schrier said. "However, you hit a certain point depending on the local area and whether it can support that amount of attendance [needed to offset the cost].

"That's where we get into that breakdown between destination parks and regional parks," he continued. "With regional parks, if we're looking at getting into more than about a $10 or $15 million investment, that's not necessarily something that will bring in enough attendance from a one- to two-year period to pay for that investment. Now if we talk destination parks, that number's a whole lot higher."

A new multimillion dollar rollercoaster is a major investment, particularly compared to installing a new $50,000 flat ride. And Schrier says the question park management should be asking is, ''Will these attractions yield the same amount of new guests?"

"Probably not, and that's sort of what I'm finding," he said. "But for different [regional] parks, depending on what market it's in, it actually may be more beneficial to install a couple of smaller, flat rides, as opposed to putting in a large, or midsized attraction."

"It will examine how well these apps are accepted and what types of features and aspects should an app have that guests would want," he said.

Schrier developed an attractions and amusement park administration course this spring to expose Iowa State students to employment opportunities available in the amusement/theme park industry. He earned the College of Human Sciences 2012 Early Achievement in Teaching Award for his efforts, which included taking his students on a field trip to Adventureland.

"The class was basically designed to give students an idea of what it's like to work in the park, or coordinate with a park or an attraction," said Schrier, who plans to offer the class again next year. "It's an HRI [Hotel, Restaurant, and Institution Management] class, but about a third of my students in the first class were events' majors. That's because it fits in with the idea that whether be it a park, museum, zoo, or a water park, you need to understand how the business, itself, works." 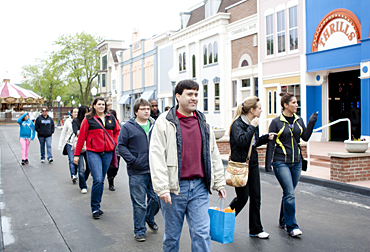 Schrier leads students from his attractions and amusement park administration course through Adventureland during their field trip there. Photo by Kara Cipolloni, ISU College of Human Sciences (print quality photo)

Traveling the country each summer

That's why Schrier travels around the country each summer to expand his knowledge and continue his research on theme/amusement parks. He also fills a void in the academic literature.

"The thing about the research in theme parks is that because of the fact that parks encompass so much of the hospitality industry, much of the research kind of gets broken up into the unique aspects," he continued. "And so while a study may be done about a Disney hotel, it's really about a hotel and not about the park itself."

Schrier hopes to change that while helping better prepare Iowa State students for future employment in amusement/theme park management in the process.

"It sort of depends a little on the market itself, but the overall trend shows that yes, a large investment does bring in larger amounts of attendance. However, you hit a certain point depending on the local area and whether it can support that amount of attendance [needed to offset the cost]."