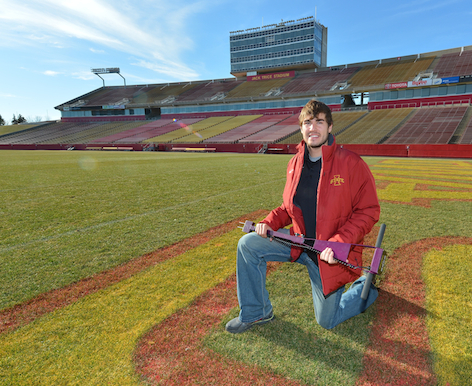 AMES, Iowa -- For a student whose career goal is sports turf management, interning at the Super Bowl is like scoring the winning touchdown in the big game. It's as good as it gets.

And Iowa State University senior Kevin Hansen (horticulture major and football fanatic) is beyond excited about this once-in-a-lifetime opportunity. Not only will he work alongside the stars of his chosen profession, he'll be on the sidelines during the game.

"I don't think it will sink in until I get there," said Hansen. "I never imagined I'd be going to a Super Bowl, let alone be on the sidelines. Football has been my life."

The Toro Co. and the National Football League have worked together on Super Bowl fields since 1967. In 2003, they established the internship program to recognize one student who has shown exemplary skill in turf management.

Toro awarded Hansen the internship on Nov. 30. He was one of 18 applicants from 17 college turf programs nationwide. The application required a 500-word essay.

"Kevin was chosen due to the quality of his essay, his internships that provided varied sport turf management experiences and the quality of the recommendations that accompanied his application," said Paula Sliefert, senior marketing manager in Toro's Commercial Division.

Hansen's resume would be hard to beat. He has held turf-related jobs since his junior year in high school when "my mom forced me to get a job" at the Boone Golf Course. He worked on grounds crews for the city of Coralville, the Iowa Cubs and Jack Trice Stadium, where he works year-round. And last summer, Hansen had the "amazing experience" of a three-month internship with the Green Bay Packers, tending to the legendary (some say "sacred") Lambeau Field.

"They grow Lambeau in every year, so I helped re-seed and fertilize it. We also took care of their two practice fields and an indoor facility. It was a great experience. I learned a lot," Hansen said.

As part of the Super Bowl grounds crew in New Orleans, Hansen will learn from the best. He'll work alongside consultant George Toma --who has helped prepare the field for every Super Bowl game in history -- and NFL Field Director Ed Mangan. The crew will work on turf maintenance, field logo and hash-mark painting (five coats), media day field preparation, and halftime preparation and clean up. They'll also maintain two practice fields, one of which is natural grass.

"I've been fortunate to have great mentors and tremendous opportunities," said Hansen, who graduates in May and "might get his master's" before pursuing a turf management job in the NFL or at a university.

Hansen leaves for New Orleans on Jan. 27. He is a graduate of Boone High School and Kirkwood Community College in Cedar Rapids.

"I don't think it will sink in until I get there."