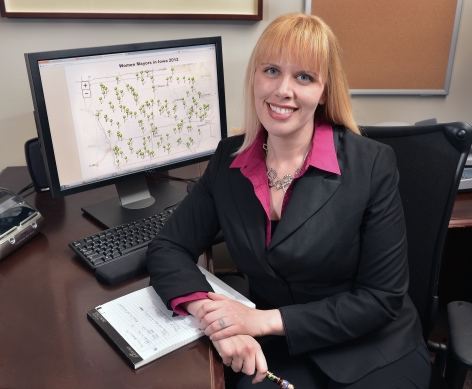 AMES, Iowa – For the first time in Iowa, women will hold two top leadership roles simultaneously – as Senate President and House Majority Leader – for the 2013 legislative session. A total of 35 women are serving in the Legislature – tying a record set in 2009. Both achievements are signs of progress for the Carrie Chapman Catt Center for Women and Politics at Iowa State University.

Valerie Hennings, a scholar-in-residence at the Catt Center, said that progress is based partly on the success of women in the 2012 election. There were 55 women on the ballot in Iowa for a legislative seat, compared to 171 men.

“When women run, they do win,” Hennings said. “In fact, the 55 women running for the Iowa Legislature had a success rate of 60 percent compared to the 55 percent success rate of the 171 men who ran.”

The analysis of the 2012 election results can be found on the “Women in Iowa Politics” database created and maintained by the Catt Center. The online database also includes reports and fact sheets on women elected to state, county and municipal offices. Hennings wants to provide an accurate picture of the political involvement of women in Iowa.

“It’s important that we have this research foundation, in terms of what the political status of women in this state really is. Prior to the creation of this project, we didn’t have information like this that was easily accessible because it wasn’t being collected, it wasn’t being archived, and it wasn’t being analyzed in a systematic way,” Hennings said.

It took months to collect and verify the information and gender of each candidate to make sure the database is reliable and accurate. The hope is that the database will be a tool, not only for women, but for researchers, reporters and the general public.

Bystrom said there is a strategy to getting more women elected in Iowa. The election analysis of legislative races found women had greater success in open seat races instead of running against an incumbent. This is often true regardless of gender and follows national trends.

“National statistics show that women running against men, in open seat races, are a 50-50 proposition,” Bystrom said. “Unless you’re the incumbent, you have your best chance of winning in an open-seat race rather than as a challenger.”

Providing more in-depth analysis of election results is one way Hennings and Bystrom intend to further the progress of women in politics. The database features an interactive map that includes the names and contact information for women mayors, council members and state lawmakers in Iowa.

Too often, Hennings said, women avoid running for office because they believe they are unqualified or they do not want to try again if their first attempt was unsuccessful. Through the database, women can locate and reach out to other women, currently in office, for advice, guidance and support to run again.

“Candidates gain momentum, once you lay that groundwork through a campaign, whether it’s successful or not. You can build upon the resources and the connections and the backing that you gained through that earlier candidacy to launch a second,” Hennings said.

Core to its mission, the Catt Center is dedicated to educating and involving citizens, particularly women, in the political process. The new database not only supports that mission, but is a complement to the Catt Center’s non-partisan campaign training program, “Ready to Run™ Iowa.”

This year the Ready to Run Iowa program will feature six interactive workshops to help recruit and prepare women to run for an elected or appointed office or to become more involved in public life as leaders in their communities. The first workshop is scheduled for Friday, Jan. 18. Program and registration information can be found on the Catt Center’s website.

A new database created by the Carrie Chapman Catt Center for Women in Politics at Iowa State University puts Iowa on the map as one of the few states to track women serving in government. It is a tool, not just for women, but for researchers, students and the general public.

“It’s important that we have this research foundation, in terms of what the political status of women in this state really is. Prior to the creation of this project, we didn’t have information like this that was easily accessible because it wasn’t being collected, it wasn’t being archived, and it wasn’t being analyzed in a systematic way.”