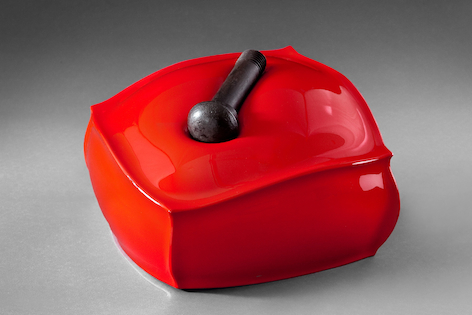 Works by Joe Muench and Chris Martin were selected for awards by the sole juror, Jennifer Scanlan, who is associate curator of the Museum of Arts and Design, New York City.

The exhibition at the Mesa Arts Center (Jan. 25-March 31) is one of the most highly selective shows of American traditional craft forms, including ceramics, fibers, basketry, metals, wood, glass and jewelry. From 275 entries, only 47 were chosen. Of those, three won Juror's Awards.

Muench's sculpture, "Red Pillow Block with Bolt," is made of hand-formed and fabricated steel, a found object and paint. It is part of an ongoing series that records the idea of the transitory, stopped motion, stopped time.

"The viewer is presented with a paradox: a seemingly hard and resilient metal body appears to be soft and pliant, yielding to, yet surviving the dynamic forces of an external ballistic impact," Muench said. "This recorded observation alludes to the questions, challenges and fleeting nature of life, encouraging a momentary suspension of belief — what appears real exists for an instant and then may be gone."

Muench also had work accepted into the Mesa exhibition in 2003 and 2009.

Martin, who had two pieces selected for the 2013 exhibition, won for "Linguist Staffs for the American Tribe." Made of painted and ebonized wood, it reflects Martin's experience as a Peace Corps volunteer in Ghana, West Africa (2008-10), and pays homage to the country's craft forms and artisans. 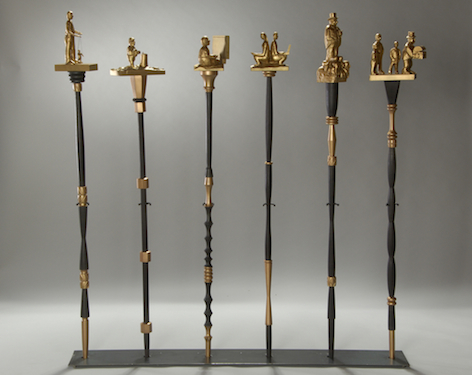 The artwork is part of Martin's "Reflections of Africa" collection, in which he draws inspiration from local tribal aesthetics and strives "to convey the imprint that living in Ghana has left upon me," he said.

"In Ghana, linguists are high ranking officials within the chieftaincy system, identified by their staffs," Martin explained. "The linguists' responsibility is to be the ears and voice of their chiefs because one does not speak directly to a chief, but rather through his linguist. Each staff is topped with a carving, which symbolizes a moral or value important to the tribe."

The artwork was supported by grants — Muench's by a grant from ISU's Center for Excellence in the Arts and Humanities, and Martin's by an Iowa Arts Council grant.

Two associate professors of integrated studio arts have won Juror's Awards at the 34th Annual Mesa Contemporary Crafts exhibition, one of the most highly selective shows of American traditional craft forms. From 275 entries, only 47 were chosen. Of those, three won Juror's Awards. 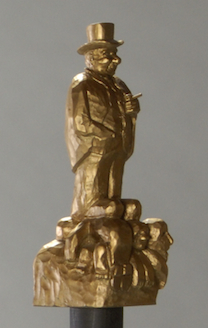 Detail from Martin's "Linguist Staffs for the American Tribe." Photo by George Ensley.

"Each staff is topped with a carving, which symbolizes a moral or value important to the tribe."