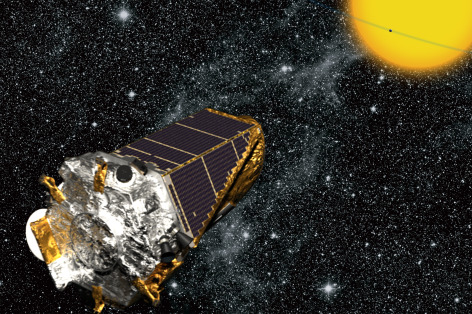 The Kepler spacecraft finds planets beyond our solar system by detecting changes in star brightness when a planet passes in front of a star. Larger image. Image by NASA/Kepler Mission/Wendy Stenzel.

AMES, Iowa – An international team of astronomers has used nearly three years of high precision data from NASA’s Kepler spacecraft to make the first observations of a planet outside our solar system that’s smaller than Mercury, the smallest planet orbiting our sun.

The planet is about the size of the Earth’s moon. It is one of three planets orbiting a star designated Kepler-37 in the Cygnus-Lyra region of the Milky Way.

The findings were published online on Feb. 20 by the journal Nature. The lead authors are Thomas Barclay of the NASA Ames Research Center in California and the Bay Area Environmental Research Institute and Jason Rowe of NASA Ames and the SETI Institute in California.

Steve Kawaler, an Iowa State University professor of physics and astronomy, was part of a team of researchers who studied the oscillations of Kepler-37 to determine its size. “That’s basically listening to the star by measuring sound waves,” Kawaler said. “The bigger the star, the lower the frequency, or ‘pitch’ of its song.”

The team determined Kepler-37’s mass is about 80 percent the mass of our sun. That’s the lowest mass star astronomers have been able to measure using oscillation data for an ordinary star.

“Owing to its extremely small size, similar to that of the Earth’s moon, and highly irradiated surface, Kepler-37b is very likely a rocky planet with no atmosphere or water, similar to Mercury,” the astronomers wrote in a summary of their findings. “The detection of such a small planet shows for the first time that stellar systems host planets much smaller as well as much larger than anything we see in our own Solar System.”

Kawaler said the discovery is exciting because of what it says about the Kepler Mission’s capabilities to discover new planetary systems around other stars.

Kepler launched March 6, 2009, from Florida's Cape Canaveral Air Force Station. The spacecraft is orbiting the sun carrying a photometer, or light meter, to measure changes in the brightness of thousands of stars. Its primary job is to detect tiny variations in the brightness of the stars within its view to indicate planets passing in front of the star. Astronomers with the Kepler team are looking for earth-like planets that might be able to support life.

The Kepler Asteroseismic Investigation is also using data from that photometer to study stars. The investigation is led by a four-member steering committee: Kawaler, Chair Ron Gilliland of the Space Telescope Science Institute based in Baltimore, Jorgen Christensen-Dalsgaard and Hans Kjeldsen, both of Aarhus University in Denmark.

Kawaler said Kepler is sending astronomers photometry data that’s “probably the best we’ll see in our lifetimes.” This latest discovery shows astronomers “we have a proven technology for finding small planets around other stars.”

That could have implications for some big-picture discoveries: “While a sample of only one planet is too small to use for determination of occurrence rates,” the astronomers wrote in the Nature paper, “it does lend weight to the belief that planet occurrence increases exponentially with decreasing planet size.” 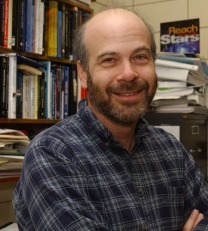 Astronomers have discovered a planet beyond our solar system that's about the size of the Earth's moon -- the first time they've found a planet smaller than any of the planets orbiting our sun. Iowa State University's Steve Kawaler was part of the research team that determined the size of the tiny planet's host star. The findings were published online on Feb. 20 by the  journal Nature.

Kepler is sending astronomers photometry data that’s “probably the best we’ll see in our lifetimes.” This latest discovery shows astronomers “we have a proven technology for finding small planets around other stars.”