ISU sociologists find treatment works, but only for urban parolees 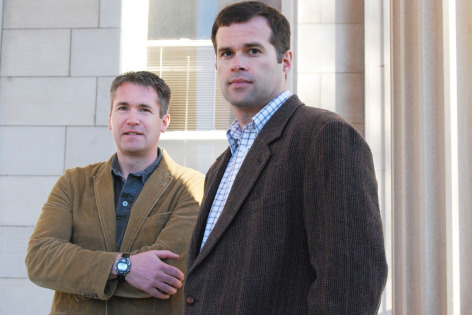 David Peters and Andy Hochstetler are working with the Iowa Department of Corrections to reduce the rate of recidivism. Photo by Nick Van Berkum

AMES, Iowa – There are several risk factors that influence whether an offender walks out of prison for good or one day returns to the correctional system. States make a significant investment in treatment programs with the goal of reducing the rate of recidivism, and researchers at Iowa State University say that investment is paying off.

“It goes back to the big question: does treatment work? And we show pretty powerful effects overall that it does. There’s nobody that can look at that kind of reduction and say dollars spent on treatment are not worth it,” said Andy Hochstetler, a professor of sociology.

Researchers expected most of the benefits to appear in the short-term, but found that treatment was still effective even two years after the initial investment. The research also uncovered a significant disparity between urban and rural parolees that Hochstetler and David Peters, an assistant professor of sociology, cannot yet explain.

Treatment for urban parolees reduced the recidivism rate by 40 percent. Hochstetler and Peters can only speculate about reasons for the differences for rural parolees. They believe access and distance to treatment programs could be contributing factors. In their study, they controlled for factors such as severity of the original crime, time spent in prison and community structural issues.

“It’s not the community poverty rate, it’s not the labor economy and it’s not all those other things,” Hochstetler said.

Substance abuse treatment is the most common type of assistance for offenders, followed by programs that help improve cognitive and decision-making skills. Although researchers can show that treatment works, 65 percent of offenders in Iowa do not complete any treatment program while they are incarcerated or during the first year after they are granted parole.

“The average sentence is pretty short, so a lot of the inmates are paroled before their treatment is complete,” Hochstetler said. “A lot of inmates don’t have to do treatment, a lot of them refuse treatment, and a lot of them have psychiatric problems that prevent the standardized kinds of treatment that the Department of Corrections can offer.”

Researchers know that drug and alcohol problems increase the risk of recidivism and that rural parolees continue to struggle with substance abuse, even if they have received treatment.

“With substance abuse, some would argue that you can never really treat that, it’s always going to be an ongoing problem. You’re never cured,” said Peters. “It’s always something that you have to keep under control.”

Urban parolees typically face fewer barriers to accessing treatment because there are more substance abuse programs available and they have greater access to public transportation. Peters and Hochstetler want to know if limited access and distance to programs in rural areas may increase the chances that parolees will relapse and violate the terms of their parole.

For the first phase of this research project, Hochstetler and Peters analyzed data about treatment programs and recidivism rates from the Iowa Department of Corrections and community-based corrections programs. They presented their findings to the Iowa Board of Corrections in January. The research is funded through a grant from the National Institutes of Justice.

Now they hope the second phase of their study – which includes interviews with probation officers and community corrections officials – will help them understand why treatment doesn’t work for rural parolees.

“Clearly, there is a difference in how you engage rural and urban parolees. We don’t know why, but we’re hoping to say that for rural parolees there are certain strategies that work best and for urban parolees a different set,” Peters said. “We’re hoping to find a set of tools or best practices and strategies that we know will have an effect given the risks of the offenders.”

Identifying those best practices can help reduce the rate of recidivism and provide a cost savings for states.

States make a significant investment in treatment programs for prison inmates with the goal of reducing the rate of recidivism, and researchers at Iowa State University say that investment is paying off. However, their research also uncovered a significant disparity between urban and rural parolees.

“It goes back to the big question: does treatment work? And we show pretty powerful effects overall that it does. There’s nobody that can look at that kind of reduction and say dollars spent on treatment are not worth it.”