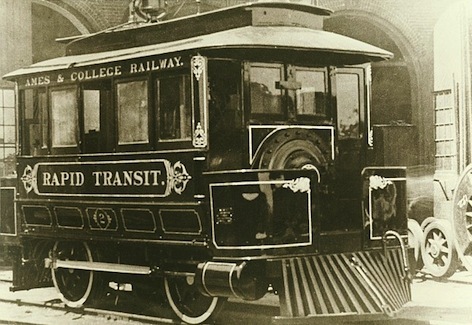 AMES, Iowa -- Although it's no longer a fixture on the Iowa State University campus, the Dinkey looms large in local history. The steam engine that ran between campus and downtown Ames from 1891 to 1907 will be featured in an upcoming slide show of historic photographs.

Ames native and Iowa State alumnus Douglas Biggs will present "Iowa State College in the 1890s: A Visual History," at 8 p.m. Monday, March 11, in the Memorial Union Sun Room. His talk is free and open to the public.

Biggs is associate dean of the College of Natural And Social Sciences at the University of Nebraska-Kearney and an associate professor of history. The son of an ISU geology professor, he spent much of his youth exploring the campus. He earned his bachelor's and master's degrees in history from Iowa State before completing his doctoral degree in medieval English political history at the University of Minnesota.

Biggs renewed his interest in Ames and Iowa State history when his wife — Gloria Betcher, an Iowa State adjunct associate professor of English — was chair of the Ames Historic Preservation Commission. Betcher asked him to help determine the historical significance of the derelict bridge that spanned the Squaw Creek, just south of the Union Pacific bridge. As a result of the request, Biggs began conducting research on Iowa State in the 1890s at the University Archives. The first installment of his research was published in the Annals of Iowa in 2012.

A scale model of the Dinkey, complete with track, will be on display in the east end of the Parks Library through May. It  faces the Hub, which is constructed on the site of the original train's terminus on campus. The model is on loan from the Ames Historical Society.

Biggs' presentation is co-sponsored by the Iowa State University Library and the Committee on Lectures, which is funded by the Government of the Student Body. More information on ISU lectures is available online at http://www.lectures.iastate.edu, or by calling 515-294-9935.

"Iowa State College in the 1890s: A Visual History"