Watch how students in Jay Newell's advertising class learn in both English and Chinese.

AMES, Iowa – Jay Newell had seen the look before, but never on quite so many faces.

“It’s distracting when it’s a whole group of people,” said Newell, an associate professor in the Greenlee School of Journalism and Communication at Iowa State University.

The fact that so many students in Newell’s introductory advertising class had that glazed-over, disconnected look was also troubling. Until he realized the students all had one thing in common – they were all from Chinese-speaking countries.

From that day forward, Newell has worked to break down the language barriers in his classroom to help students connect and engage in the material. One way he is doing that is by providing course materials in both English and Chinese. Newell enlisted the help of Nai-Se Li, a graduate student in journalism, to translate the slides for his class lectures and the course syllabus.

“The slides are projected in English and in Chinese. The attention in class went up among the Chinese students because now they had context and knew what we were getting into. We then translated the syllabus into Chinese, and compliance with course rules also went up,” Newell said.

The majority of undergraduate international students at Iowa State come from China and other Chinese-speaking countries. Regardless of the students’ fluency in English, Newell found they do not always understand the context or nuances of the language. Li explained that the meaning often gets lost in translation.

“When students see the English, they have to translate to Mandarin, their primary language. Then they have to translate back to English,” Li said. “Using the Chinese, they can learn the term in their primary language first and then they can respond in English in their own way. They can process in their own language and then respond with what they’re really thinking.”

Li dedicates several hours per lecture to translate the course slides. Her goal is to provide students with the meaning of the concept, not just a direct translation. It appears to be working. A series of surveys across multiple semesters reported that multi-lingual course materials helped Chinese students learn the content and increase their knowledge of English. 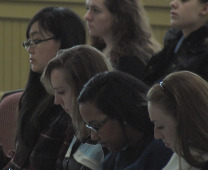 According to Newell, the translated materials also received high acceptance among English-speaking students. “An unanticipated but happy outcome,” Newell said, “was that domestic students viewed the multi-lingual materials as providing an example of how they could work in a multi-national world. They saw it as a symbol of Iowa State’s acceptance of diversity.”

This is just one example of how the Iowa State faculty is working to improve the learning environment and campus experience for Chinese students. Aili Mu, an associate professor of world languages and cultures, encourages students in her Chinese language course to learn from each other. She pairs up Chinese-speaking students with English-speaking students to improve their writing and speaking skills.

Mu admits that at first, she was skeptical of the Chinese students who enrolled in a Chinese language course. But she quickly realized the students were not motivated by an easy grade – instead they had a desire to learn about the English culture from their classmates.

“Chinese students come to this country to learn, but they also want to know the people, the culture, and the language to feel at home and to make friends,” Mu said. “Students want to be engaged in activities, they want to gain experience and enrich their experiences so that they can be more competitive in the job market.”

Through this experience students improve their language skills and understand how much they can learn from one another. Both Mu and Newell believe it also starts to break down some of the stereotypes that exist between the two cultures.

“The ramifications and the way they learn from each other, it continues beyond the class,” Mu said. “Just like any other students, they bond, they work, they play and they become good friends.”

Newell said the classroom experimentation raises larger questions about the role of language in the college classroom. “There is an unspoken assumption among educators that all international students are planning to stay in the United States following graduation, and conduct their life’s work only in English. The realities of the modern world mean that we should train both our domestic and international students to work across languages and cultures.”

“There is an unspoken assumption among educators that all international students are planning to stay in the United States following graduation, and conduct their life’s work only in English. The realities of the modern world mean that we should train both our domestic and international students to work across languages and cultures.”

Jay Newell, associate professor in the Greenlee School of Journalism and Communication