Iowa State engineers developing ideas, technologies to save the Earth from asteroids 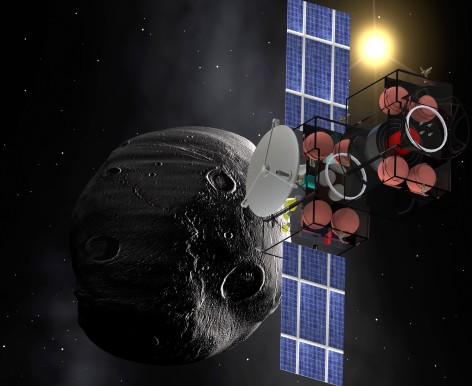 You want to protect the Earth from asteroids? Where were you when the dinosaurs needed you? You want to be like Bruce Willis in that asteroid movie?

Wie has a serious reply: After five years of science and engineering work, Wie and his small team have a publication list of 40-plus technical papers, $600,000 of NASA research support and a proposal for a $500 million test launch of an asteroid intercept system. Plus, Wie has just been invited to show off his research as part of NASA's Technology Day on the Hill in Washington, D.C., on April 17.

“It’s not a laughing matter,” said Wie, the director of the Asteroid Deflection Research Center at Iowa State University and the Vance D. Coffman Faculty Chair and professor of aerospace engineering.

Recent events have certainly highlighted the threat of asteroid strikes. There was the 15-meter (49-foot) meteor that exploded an estimated 12 miles over Chelyabinsk, Russia, on Feb. 15, damaging buildings and injuring more than 1,000 people. That same day, the 45-meter (148-foot) asteroid 2012 DA14 passed within 17,200 miles of Earth.

“DA14 was a serious near miss,” Wie said. “If that impact had happened, it would have been the equivalent of 160 Hiroshima nuclear bombs.

“Even though I say that so many times, people just laugh.”

Wie’s studies lead him to believe it will take a one-two nuclear punch to break an asteroid into harmless pieces when there isn’t sufficient warning to use non-nuclear defenses. Here’s how it would work:

The asteroid chunks would spread into a large debris cloud. By the time Earth reached the cloud, Wie said less than .1 percent of the chunks would enter the atmosphere. And those should only be 5-meter (16-foot) pieces that aren’t likely to do much harm.

But will it work?

“We have all the technology,” Wie said. “We don’t need anything new. But we need to engineer, integrate and assemble these technologies. And we need practice.”

Wie came to Iowa State in 2007 after a successful academic career researching spacecraft control and guidance. (He’s the author of a textbook, “Space Vehicle Dynamics and Control,” published by the American Institute of Aeronautics and Astronautics.)

He was looking for a new research direction and in 2008 was able to use some money from his Coffman Faculty Chair position to establish the Asteroid Deflection Research Center. Money from the Iowa Space Grant Consortium also supported the center during its early days.

There wasn’t much of a research budget until the center won a $100,000 Phase I grant from the NASA Innovative Advanced Concepts program (NIAC) in 2011. The center won a $500,000 NIAC Phase II grant last fall.

Even with the grants, it’s still not a big operation: There’s Wie, there’s John Basart, a professor emeritus of electrical and computer engineering who’s volunteering his time, and there are eight graduate students.

Center researchers have published and delivered papers such as “Conceptual Design of a Hypervelocity Asteroid Intercept Vehicle (HAIV) and Its Flight Validation Mission” and “Guidance Algorithms for Asteroid Intercept Missions with Precision Targeting Requirements.”

Basart has been busy studying and calculating the potential use of the Yarkovsky Effect to slowly redirect the orbital motion of an asteroid. The phenomenon takes into account heating cycles of an asteroid and how that solar energy can actually cause an asteroid’s orbit to shift slightly.

“An intercept mission is not a trivial thing,” Basart said. “It’s terribly complicated. If we learn an asteroid is going to hit in a year, we don’t have a lot of time to prepare.”

But, he said researchers had better prepare.

"One thing we’ve learned in science over the last 50 years is how violent our universe is,” Basart said. “Yes, we have a violent universe and it’s important for our human race to plan for this. It’s not a matter of if; it’s when.”

Iowans should know. A 2-kilometer (1.2-mile) asteroid struck what is now Manson some 74 million years ago. That impact created a crater, now buried well below the northwest Iowa topsoil, 22 miles wide and 3.5 miles deep. And geologists say recent aerial surveys have confirmed a 200-meter (656-foot) meteorite crashed into what is now northeast Iowa's Decorah some 470 million years ago. That impact left a crater – now underground – that’s 3 miles in diameter.

To date, Wie, his Iowa State research team and Brent Barbee of NASA’s Goddard Space Flight Center in Maryland have been working with data generated by computer simulations. Wie said it’s time to integrate the necessary technology, build an unarmed prototype satellite and launch an actual test to see if a target asteroid can be hit.

He thinks the answer is yes because NASA engineers and scientists have already accomplished a very similar mission.

In July 2005, the impactor from NASA’s Deep Impact Mission crashed into Tempel 1, a comet that measures 7.6 by 4.9 kilometers (4.7 by 3 miles). The impact was designed to create a crater 25 meters deep (82 feet) and 100 meters wide (328 feet), exposing the comet’s interior. The mission’s flyby spacecraft passed over the crater to take pictures and collect spectroscopy data.

And so Wie is writing up a proposal for a $500 million test mission.

“Now is the time to talk about a test mission,” he said. “It is time to develop a plan and demonstrate this concept.” 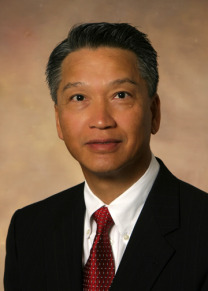 Iowa State University's Bong Wie is leading a team that's developing a system to protect the planet from asteroid strikes. The work has attracted $600,000 in NASA support. NASA has also asked Wie to show off his research at NASA's Technology Day on the Hill in Washington, D.C., on April 17.

“DA14 was a serious near miss. If that impact had happened, it would have been the equivalent of 160 Hiroshima nuclear bombs.

“Even though I say that so many times, people just laugh.”

Bong Wie, the director of the Asteroid Deflection Research Center at Iowa State University and the Vance D. Coffman Faculty Chair and professor of aerospace engineering.

“One thing we’ve learned in science over the last 50 years is how violent our universe is. Yes, we have a violent universe and it’s important for our human race to plan for this. It’s not a matter of if; it’s when.”

John Basart, a professor emeritus of electrical and computer engineering