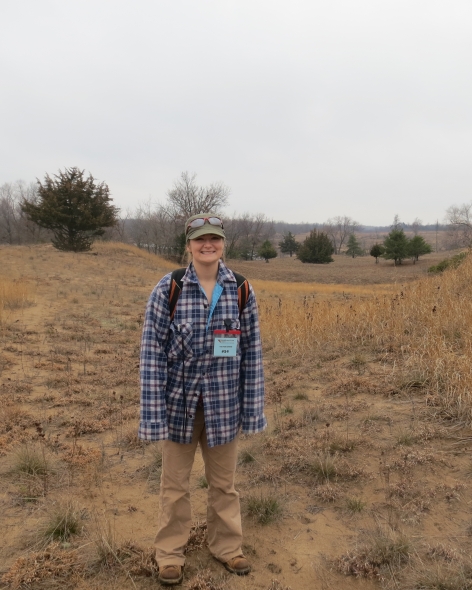 AMES, Iowa – Winter is prime time for lichen hunting, and a graduate student at Iowa State University is taking full advantage of the opportunity.

Amy Podaril, a graduate assistant in ecology, evolution and organismal biology, has focused her studies on hunting and cataloging lichens in southeast Iowa. Since November, Podaril has discovered five species of lichen that have never been encountered before in Iowa, according to the best records available to Podaril.

“Basically, my goal is to find as many different species as I can,” she said recently in her office in Bessey Hall. “I’m focusing on the southeastern part of the state because very little collecting has been done there over the years.”

Lichens, composite organisms that consist of some combination of a fungus, an algae or cyanobacteria sharing a symbiotic relationship, grow all over the state. Podaril said winter is the most fruitful time of year to search for them because plant life that may obstruct her view during the rest of the year is generally dormant during the winter months.

Podaril said part of her research focuses not only on what lichen species are present in Iowa but also which species are missing.  She said some 40 to 45 “species of concern” documented in Iowa in decades past can’t be found today.

She said changes in Iowa’s ecology, especially the conversion of old-growth forest and prairie into agricultural and urban uses over the last 150 years, may account for some of those species disappearing from the state.

James Colbert, an ISU associate professor of ecology, evolution and organismal biology, said failing to catalog lichens now could lead to gaps in our understanding of the state’s ecology in the future.

“Humans have been tinkering globally with our ecosystems, and we’ve thrown away parts that we don’t even know we’ve lost,” he said. “How would we know we’re at risk of losing something if we didn’t have someone out there looking?”

Podaril, who was inspired to study lichens as an undergraduate after taking a biology course taught by Colbert, said she uses a handheld magnifying lens while looking for lichens, and she searches a variety of landscapes. Rock outcroppings, for instance, often provide ideal habitat for her quarry, she said.

Colbert said people tend to overlook lichens, but he said studying them adds to our understanding of the vast biodiversity Iowa boasts. He said 450 species of lichen have been cataloged in Iowa, which is roughly equal to the number of bird species in the state and several times the number of mammals that call Iowa home.

Often thought of as having little value to humans, some lichens can be used to produce dyes and perfumes, and, more recently, it’s been discovered that some species produce enzymes that may have medicinal value, Colbert said.

“So we know this is a reasonably diverse group of organisms,” Colbert said. “They’re part of our biological diversity, but we don’t always have a lot of information about them.”

Parmotrema perlatum, one of five lichen species documented in Iowa for the first time by Podaril.

An ISU graduate student has focused her studies on hunting and cataloging lichens in southeast Iowa, discovering five species that have never been encountered before in Iowa.