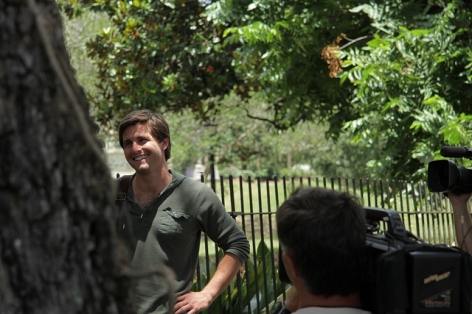 Brendan Dunphy, an ISU research associate in entomology, on set while filming a documentary for the Science Channel. Larger image. Photo courtesy of Brendan Dunphy.

AMES, Iowa – A research associate in the Iowa State University entomology department will hit the airwaves as the host of an internationally broadcast documentary program about insects.

Brendan Dunphy, a familiar face to many across the state as the storyteller in Iowa State’s “Choose Your Adventure” television spots, stepped in front of the cameras once again, this time for the Science Channel.

“Planet Ant” will debut on Tuesday, April 30, at 9 p.m. on the Science Channel and features Dunphy as a host and narrator. “Inside Out:  Bugs,” another Science Channel program starring Dunphy, debuted earlier this month and will begin airing in the United Kingdom on BBC4 this week.

Both programs offer viewers unique insight into the world of insects, Dunphy said.

“Planet Ant” documents a group of scientists as they transplant part of a colony of leafcutter ants in Trinidad to the Glasgow Science Center in Scotland, where the colony is monitored and studied. Dunphy said the transplanted ant colony is thriving, with over a million individual ants – including a queen – making up its population.

“It’s basically one of the largest ant farms ever known,” Dunphy said of the project. “And it’s given us an incredible look at the division of labor among the ants. In addition to the queen, there are worker and soldier ants. One of the main points of the program is finding out what ants can teach us about ourselves.”

“Inside Out: Bugs” follows Dunphy and co-host James Logan as they dissect a cockroach and discuss the various organ systems that have helped make insects some of the most successful and long-lived animals on Earth. The format allows Dunphy and Logan to explore different facets of insect biology and include interviews with various experts who contribute their expertise on the topic.

Dunphy said he drew on his previous experience both on stage and in front of the camera throughout the process of shooting the documentaries, but it was his background as a scientist and entomologist that made him the right fit for the programs.

A 2007 ISU graduate, Dunphy works as an associate in the ISU Medical Entomology Laboratory as a mosquito biologist. Dunphy first learned of the opportunity to host a Science Channel documentary through one of his former professors who thought Dunphy was right for the job.

The tip paid off.

Dunphy hosted a program titled “Insects and the City,” in which he traveled to New Orleans to explore the city’s most exotic and interesting bugs. “Insects in the City,” which first aired in December on the Science Channel, led to the opportunity to host the two shows airing this week.

He said he’s happy to have worked with the Science Channel, which is under the umbrella of the Discovery Channel.

“I’m proud to be working with the Science Channel because it has retained the original vision of Discovery, which is to educate people about the natural world,” Dunphy said.

But don’t expect Dunphy to spend too much time watching his own show. In fact, he doesn’t watch television at all. He said he gave it up during college because he felt that watching TV took time away from his studies.

“I’ll have to watch the shows at a friend’s house,” he explained.

An Iowa State University research associate and familiar face to many across the state will hit the airwaves as the host of an internationally broadcast documentary program about insects this week.

“It’s basically one of the largest ant farms ever known, and it’s given us an incredible look at the division of labor among the ants. In addition to the queen, there are worker and soldier ants. One of the main points of the program is finding out what ants can teach us about ourselves.”