AMES, Iowa -- One of the leading Native American voices of our time will speak at Iowa State University on April 1.

Joy Harjo will present "Crazy Brave" at 8 p.m. Monday, April 1, in the Memorial Union Great Hall. Her presentation is the 2013 Richard Thompson Memorial Lecture and the 2013 English Department Goldtrap Lecture.

Harjo's new memoir, "Crazy Brave," is a tale of hardscrabble youth, teenage motherhood and her journey to become an internationally recognized writer and performer. She is the author of seven books of poetry, including "How We Became Human-New and Selected Poems," "The Woman Who Fell From the Sky" and "She Had Some Horses."

Harjo also has released four CDs of original music and performs poetry and plays saxophone with her band, Poetic Justice. She has performed at the Atlanta Olympics, the Sundance Film Festival, the National Museum of the American Indian and the Smithsonian Folklife Festival. In 2009, she won a Native American Music Award for Best Female Artist of the Year.

Harjo's many awards and honors include the Lifetime Achievement Award from the Native Writers Circle of the Americas, the William Carlos Williams Award from the Poetry Society of America, The American Indian Distinguished Achievement in the Arts Award. Harjo is the recipient of a National Endowment for the Arts fellowship.

Harjo is a member of the Muscogee/Mvskoke Nation. 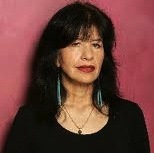 
Free and open to the public