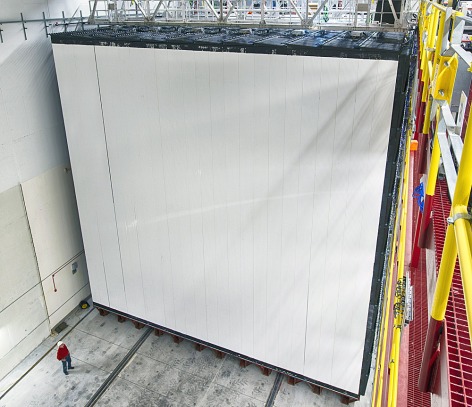 The NOvA experiment's far detector is under construction in Ash River, Minn. The completed detector will weigh 14,000 tons and will be 200 feet long, 50 feet wide and 50 feet tall. Larger photo. Photo by Fermilab.

AMES, Iowa – It won’t be long before the NOvA experiment sends neutrinos on a 500-mile journey from northeast Illinois to northern Minnesota. And when one of those neutrinos shows up in the experiment’s massive detector for the first time, Iowa State University’s Mayly Sanchez will be right there.

“Once we see the first neutrino, it will be very exciting,” said Sanchez, an Iowa State assistant professor of physics and astronomy with a joint appointment at the U.S. Department of Energy’s Argonne National Laboratory in Argonne, Ill.

Sanchez, who was presented a 2012 Presidential Early Career Award for Scientists and Engineers at the White House last summer, is leading the experiment’s analysis of the appearance of electron neutrinos in the Minnesota detector.

That analysis is at the heart of the NOvA experiment.

Sometime this summer, the experiment is expected to begin firing the world’s most intense beam of neutrinos from the Department of Energy’s Fermi National Accelerator Laboratory in Batavia, Ill., to a 14,000-ton detector in Ash River, Minn. The neutrinos will travel underground about 500 miles, reaching a maximum depth of about 6 miles.

Because neutrinos rarely interact with matter – the sun sends a trillion of them streaming through your body every second – they’ll travel unimpeded through the ground. They’ll complete the trip in less than .003 of a second.

That’s enough time for the neutrinos to transform themselves from muon neutrinos to electron neutrinos. Physicists hope a better understanding of that change – called neutrino oscillation – will not only answer questions about the hard-to-study particles, but also about the early universe.

“We know that transformation does happen,” Sanchez said. “Now we will see it. And that will tell us about the universe.”

Sanchez is also hoping there are a few surprises in the experiment’s data. New experiments operating at new intensities and distances can lead to the discovery of new physics.

“It’s going to be a lot of fun to have the data coming in,” Sanchez said.

But this isn’t collider physics. Researchers won’t be buried in neutrino data. Even with the most intense beam of neutrinos and a detector that’s 200 feet long, 50 feet wide and 50 feet tall, researchers won’t see many neutrinos.

The challenge of this “needle-in-the-haystack problem,” she said, will be separating the electron neutrino data from the continuous shower of cosmic ray data.

A ‘vital time’ for the experiment

Gavin Davies, a post-doctoral research associate who’s working in Sanchez’s research group and is based at Fermilab and the NOvA experiment, said these are very busy and important days for the experiment.

In late March, experiment leaders announced that a small part of the NOvA’s Minnesota detector had collected its first 3-D images of particles. The images were from cosmic rays passing through the active section of the detector, now about 12 feet long, 15 feet wide and 20 feet high.

“We like to say that we’ll be busier than ever when the neutrino beam turns on, but now is also ridiculously busy,” Davies said. “There’s so much to do. Right now is vitally important to the experiment.”

Researchers are using the cosmic ray data to help them understand and calibrate the far detector in Minnesota. Preparations are well under way to build a near neutrino detector at Fermilab. And Davies is attending meetings, sorting through email questions from graduate students and preparing the software that will be used to share and analyze neutrino data.

But there are no complaints from Davies, who has been an Iowa State researcher for nearly three years.

“For me personally, it’s great,” he said. “I’m at Fermilab, at the cutting edge, and I know within minutes whenever something happens.”

“I’m excited to be a neutrino physicist right now,” Davies said. “And I’m excited about what our detector can tell us about these pesky neutrinos.”

When the NOvA experiment begins sending a beam of neutrinos on a 500-mile journey this summer, Iowa State University physicists will be in the middle of the research action. They'll help lead the experiment and analyze the data. The results could offer clues to the early universe and to the abundant, but hard-to-study particles. 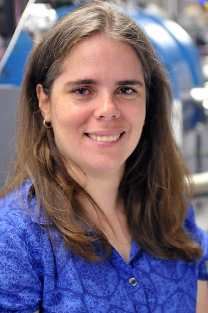 “Once we see the first neutrino, it will be very exciting.”

Mayly Sanchez, an Iowa State assistant professor of physics and astronomy with a joint appointment at the U.S. Department of Energy’s Argonne National Laboratory 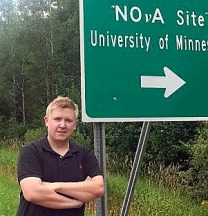 “We like to say that we’ll be busier than ever when the neutrino beam turns on, but now is also ridiculously busy. There’s so much to do. Right now is vitally important to the experiment.”

Gavin Davies, an Iowa State post-doctoral research associate who’s based at Fermilab and the NOvA experiment