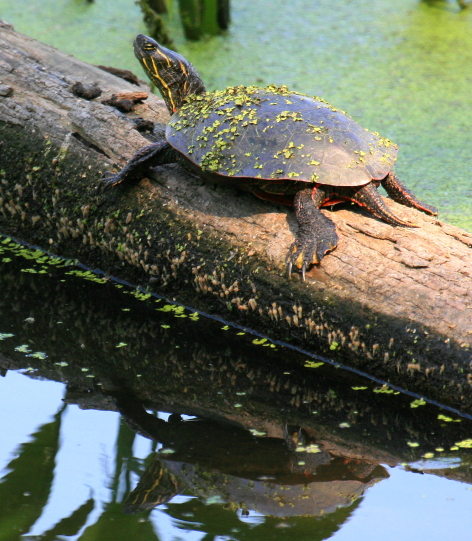 AMES, Iowa – Researchers at Iowa State University have helped to unlock some of the secrets buried deep in the genome of a common species of turtle with the use of the latest methods and cutting-edge technology.

Fredric Janzen, an ISU professor of ecology, evolution and organismal biology, said conclusions drawn by the authors of a recently published paper in the journal Genome Biology shed light on important biological topics and answer questions regarding some of the western painted turtle’s most remarkable characteristics.

For instance, a painted turtle’s sex depends on the temperature of its environment before it hatches from its egg. Cool environmental temperatures mean a male turtle will emerge from the egg, while warmer temperatures produce females, he said. Additionally, western painted turtles hibernate underwater and can survive for months with little oxygen. The offspring can even withstand having most of their bodies frozen for days at a time. They simply thaw out and suffer no obvious physical or biological ill effects, Janzen said.

By studying the western painted turtle’s genome, the researchers discovered that the genetic networks governing those unique abilities didn’t vary widely from the genetics of other closely related species, such as crocodilians and even birds.

“Turtles have repurposed some of the genes that they share with their relatives, but they’ve tweaked them and gotten some innovative outcomes,” Janzen said. “Their ability to withstand freezing cold and go great lengths of time without oxygen is a result of that.”

Janzen said this new understanding could have biomedical applications for people because the genetics at play aren’t all that far removed from human beings.

“These are the same genes we have but with slight variations,” he said. “So it’s conceivable that we could someday discover a means of turning on the ability to tolerate cold temperatures or lack of oxygen that the turtles have.”

Valenzuela said such applications could make a big difference to people who suffer from serious health problems.

“If we understand how turtles activate these genes to withstand lower oxygen concentrations, we can design therapies for people with strokes who have gone through a period of time with a lack of oxygen to the brain,” she said.

Valenzuela said humans can also learn from studying the genes that account for the longevity of turtles. She said the study found that some of the genes that tend to shorten the lives of other vertebrates were either suppressed or eliminated in the turtle genome, allowing them to live exceptionally long lives.

“In turtles, the genes that can possibly cut life short were more silenced or nonexistent,” she said. “That suggests turtles can live a long time because they repress those particular genes.”

Valenzuela, who has worked extensively on the molecular mechanism of sex determination in turtles, said her group found that the same genes responsible for the development of human embryos into males or females are present and active in turtles. But molecular changes in this common machinery are important in making the sex determination of some reptiles sensitive to temperature, she said.

Bronikowski’s lab has conducted research in the biology of aging. For the paper, Bronikowski compared all high-quality genes to those same genes in different species, including other reptiles, birds and mammals.

“The evidence we found suggests that there was more variation than expected in genes that connect metabolism with the aging processes when compared to other species,” she said. “That’s an example of a form of natural selection called positive or diversifying selection at the molecular level.”

The western painted turtles are among the most broadly distributed turtles in the world, Janzen said. They can be found in bodies of freshwater across North America, including in Iowa, he said.

Turtles have been around for 225 to 250 million years. The study shows that evolutionary change in the turtle’s genomic structure has progressed relatively slowly throughout all those millennia, Janzen said. Scientists who have studied the fossil record have long suspected that to be the case but couldn’t prove it until now, he said.

Janzen said 11 of the roughly 60 authors credited on the paper have ties to Iowa State. He said the process to map the western painted turtle’s genome began about six years ago and has drawn on the expertise of a wide array of biologists from across the globe.

Janzen’s involvement and that of other ISU-linked authors centered on figuring out how the genomic data compiled by the team translates to turtle-specific adaptations, he said. Valenzuela's group also carried out the molecular cytogenetic analysis to map the physical location of genes in the turtle chromosomes.

“This is a really complex challenge requiring a range of skill sets,” Janzen said. “My contribution is knowing about the animal and helping to interpret the genomic information. As a team, we were able to use modern technology to unlock an encrypted genome that’s been that way for over 200 million years.”

Using the latest technology, researchers at Iowa State University have helped to unlock some of the 200-million-year-old secrets buried deep in the genome of a species of turtle.

“Turtles have repurposed some of the genes that they share with their relatives, but they’ve tweaked them and gotten some innovative outcomes. Their ability to withstand freezing cold and go great lengths of time without oxygen is a result of that.”