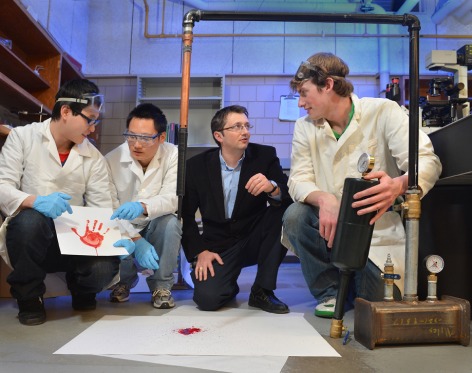 AMES, Iowa – Daniel Attinger paused before handing over a photo of a crime scene.

“Are you bothered by the sight of blood?”

There was good reason for his question: The photo showed blood pooled and smeared on a floor. Blood drops ran down a nearby wall. A single shoe was left in the evidence of violence and pain.

“You can see some of the blood has started to dry,” said Attinger, an Iowa State University associate professor of mechanical engineering. “There are elliptical stains, all pointing toward the pool. On the wall, the stains indicate the region of origin of the blood spatter.”

The size and distribution of the bloodstains offers clues to whether a violent crime was caused by a gunshot, a stabbing or a beating, he said. The drying patterns also provide clues to the timing of the attack.

“A solid forensics expertise can help find the bad guy, or can help keep the good out of jail,” Attinger said.

Analysis of bloodstains, for example, has played a role in the murder investigation and charges against Oscar Pistorius, the double-amputee sprinter who raced in the Olympics for South Africa.

But current techniques in bloodstain pattern analysis need more science behind them. As evidence, Attinger cites a 2009 report published by the National Research Council, “Strengthening Forensic Science in the United States: A Path Forward.”

Attinger and a research team he’s leading are using a three-year, $632,000 grant from the U.S. Department of Justice to take some of the uncertainty out of the analysis.

Attinger’s engineering career includes studies of the shape and deformation of ink-jetted drops, the evaporation of droplets on solid surfaces and even identification of wine stains with sophisticated pattern-recognition algorithms. His field is multiphase microfluidics, which includes precise studies of fluid dynamics, heat transfer and mass transfer.

“During these projects supported by the National Science Foundation, I developed a unique set of skills related to fluid dynamics, the generation of drops, their flight, impact and drying on a surface,” Attinger said. “I look at these phenomena and try to explain how they happened.”

And so Attinger was ready when he learned of the Justice Department’s call for scientific studies of bloodstain pattern analysis and other forensic sciences.

Within one month, he assembled a research team that includes Shih-Fu Chang, the Richard Dicker Professor of electrical engineering and computer science at Columbia University in New York, a senior vice dean for Columbia’s School of Engineering and Applied Science and director of the university’s Digital Video and Multimedia Lab; Adam Donaldson, an assistant professor of chemical engineering who specializes in computational fluid dynamics at Dalhousie University in Halifax, Nova Scotia, Canada; and Craig Moore, detective constable with the Niagara Regional Police Service in Ontario, Canada, who’s a bloodstain pattern analyst. Other collaborators include Howard Stone, the Dixon Professor of mechanical and aerospace engineering at Princeton University in New Jersey and a member of the National Academy of Engineering.

Attinger’s team is also working with the Midwest Forensics Resource Center, a collaboration of state crime labs, the U.S. Department of Energy’s Ames Laboratory and Iowa State’s Institute for Physical Research and Technology. Several Iowa Staters in the department of mechanical engineering are also part of the team: Jin Xu, a post-doctoral research associate; Miles Hayes, a senior student; and Ying Xing, another senior.

The team is working to understand the physics behind the impact and drying of blood drops. It is also working to develop portable tools that crime-scene investigators can use to analyze and interpret bloodstains.

“Our research goal is to make forensic science a bit more based on the principles of fluid dynamics,” Attinger said.

A tiny drop of horse blood appeared at the end of a slim tube. And with a push of a button, the drop was atomized into a spray that sent droplets flying across the lab and onto a long sheet of white paper. A high-speed camera takes up to 100,000 images per second to monitor the process.

Xing and Xu track the bloodstains across the paper to analyze and ultimately understand the trajectory of blood droplets through the air.

“The challenge is to reconstruct the curved trajectory of the blood,” Attinger said. “It is a problem that was described 75 years ago. It’s very complicated. Nobody has found the way yet.”

His team is also building a larger instrument that will slam a piston into a pool of blood, sending blood splashing and spattering. Data from the instrument will help the team understand bloodstains from beatings.

The research team is also working to develop a 3-D measurement device to quickly and easily measure the thickness of bloodstains at a crime scene. Attinger said that would help investigators more accurately locate the blood’s point of origin by estimating the impact velocity.

It’s not all high technology in the lab. Attinger said some of the studies involve blood sprayed by the hammer of a mouse trap. Researchers are also making painstaking counts of the tiny spikes that radiate from drops of blood thrown to a floor or wall.

Attinger said this forensics project is interesting for him and for his lab.

"I always want to show people how important engineering is to help people with their lives and with society,” he said. “I always try to find projects that are useful to society. I think engineers can do a lot to make the world a better place.”

Daniel Attinger, an associate professor of mechanical engineering, is working to put more fluid dynamics behind the bloodstain pattern analysis used at crime scenes. His research team is developing instruments to produce and study bloodstains. The team is also working to develop portable tools that crime-scene investigators can use.

“I always want to show people how important engineering is to help people with their lives and with society. I always try to find projects that are useful to society. I think engineers can do a lot to make the world a better place.”