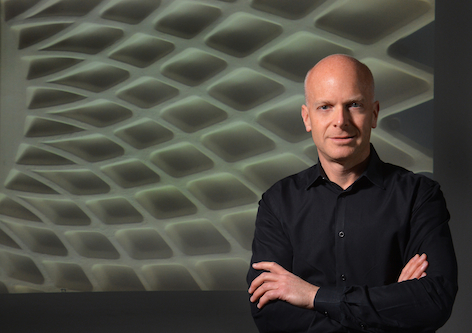 As a 2013 Rome Prize Fellow, Thomas Leslie will focus on the work of Italian architect Pier Luigi Nervi. Photo by Bob Elbert.

Each year, the academy holds a national competition to select 30 artists and scholars for resident fellowships to study in Rome for up to two years. Prizes are given in architecture, landscape architecture, design, historic preservation and conservation, literature, musical composition, visual arts, and studies of Italian culture from the ancient to the modern. The 2013 winners were announced at a ceremony in New York City on April 18.

Leslie won the prize for Booth Family Rome Prize in Historic Preservation and Conservation. He says he "gets a little dizzy" thinking about the roster he's joining.

"When I think about who has worked and studied there, I realize the bar is set really high," he said. "You have to be ambitious and do something worthy of that tradition."

Leslie knows a couple of past Rome Prize winners who returned from the experience "kicked into a different orbit," he said. "They're transformed by whom they've been around and by having the time and space to reflect and focus on one project."

During his six-month fellowship in Rome, Leslie will document, analyze and advocate for the preservation of buildings by Pier Luigi Nervi, a postwar Italian engineer and architect. Nervi is known for his technical mastery of reinforced concrete, which he used in large-span structures with a dramatic sense of design. The effect is a rich interplay of engineering and aesthetics.

Throughout his academic career, Leslie (who teaches building technology, structures and comprehensive design to future architects) has concentrated his research on the influence of structural engineering and construction on architecture and vice versa. Nervi is a major figure in this story, Leslie said, describing his buildings "cleverly conceived structures.”

"A lot of these buildings were experimental. They used new techniques; some worked and some didn't. Many suffer from very particular moisture problems related to the concrete," Leslie said. "But there is a bigger issue. The postwar buildings, which tried very hard to be new, are now old and need our attention. These 50- or 75-year old buildings are being torn down all over. How do you get the public to understand these are historic?"Unfortunately, some are "under threat of falling to pieces" or suffer from neglect. But Leslie believes these buildings have distinctive conservation challenges that apply to much postwar concrete construction.

Leslie likened the situation to the period of the 1950s and 1960s when Victorian architecture was demolished because the public deemed it ugly.

"You never know what's going to be valuable a generation later," he said.

Leslie will dig into Nervi's archives of papers and building documents to understand how the buildings were engineered and designed. 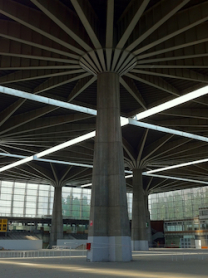 "All of his buildings have fantastic curving shapes that were done before computers. I'm curious how he figured out the geometry without having the tools we have today," he said. "And what were the specifications? What went into the concrete--what was the recipe?"

And he will meet with local preservationists, building owners and architects to raise awareness of Nervi's most imperiled works. Leslie's project could contribute significantly to the discussion of what is worth preserving and what is not.

"This could be a good pilot project or model preservation plan for how we could retrofit, renovate or rehab buildings from the postwar generation — concrete buildings in particular," he said.

When he returns to campus, Leslie will be equipped with a "huge library" of classroom examples derived from hand-drawn and hand-calculated construction documents for Nervi's complex structures. Intuitive and easy to understand, Nervi’s buildings can help students think technically during the design process, Leslie said. And his architecture graduate students can use the archival drawings to make digital reconstructions and models of Nervi's buildings to "really understand how things work in three dimensions."

He also intends to use his research to write a book on Nervi, which he hopes to start while in Rome. And he will prepare a set of technical papers about issues applicable to the preservation of postwar concrete structures.

In 2011, Leslie was named Pickard Chilton Professor in Architecture at Iowa State. The endowed professorship included a research allowance that Leslie used to travel to Rome last summer. He visited major Nervi sites, documented the buildings’ preservation problems, and connected with owners and preservationists.

“Without those funds and that trip, my Rome Prize proposal would not have been as convincing as it apparently was.”

Thomas Leslie, Pickard Chilton Professor in Architecture, has won a prestigious 2013 Rome Prize from the American Academy in Rome. Leslie won the prize for historic preservation and conservation. During his six-month fellowship in Rome, Leslie will document, analyze and advocate for the preservation of buildings by Pier Luigi Nervi, a postwar Italian engineer and architect.

The American Academy in Rome

The American Academy in Rome was established in 1894 and chartered by an Act of Congress in 1905. It is a leading center for independent study and advanced research in the arts and humanities. Situated on the Janiculum, the highest hill within the walls of Rome, the Academy provides a once-in-a-lifetime opportunity for Prize recipients to expand their own professional, artistic or scholarly pursuits, drawing on the dynamic community of colleagues and the rich, cultural legacy of Rome.