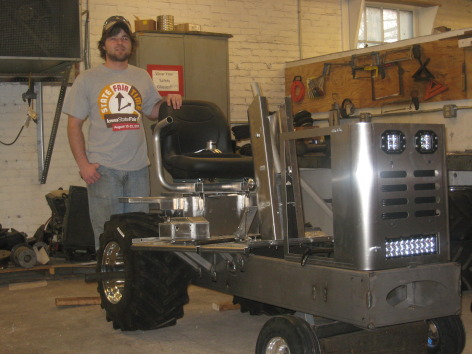 6-5-2013 update:  The Cyclone Power Pullers finished 22nd out of a field of 29 during the 2013 competition. The team's written report finished 7th out of the 29 teams in the competition and the oral presentations came in 11th place.  Team leader Alex Haight said the team ran into a slipping actuator during early competition but managed to fix the problem before the competition ended.

"It was a great time," Haight said.

AMES, Iowa – What’s that old expression about the size of the dog in the fight?

A team of students at Iowa State University is putting the finishing touches on a built-from-scratch 1/4-scale tractor to enter in a nationwide engineering competition at the end of the month. The Cyclone Power Pullers hope their tractor, the product of an entire academic year of designing and building, can top last year’s machine, which rolled away with a fourth place finish out of about 30 entrants.

Alex Haight, a senior in agricultural and biosystems engineering and leader of the 2013 Cyclone Power Pullers team, said this year’s crew made a point of keeping what worked from last year’s tractor while improving on its weaknesses.

Haight, who grew up near Waterloo, said they’ve focused on crafting a more powerful machine while still keeping in mind a range of other criteria on which the tractor will be judged during the International ¼ Scale Tractor Student Design Competition in Peoria, Ill. Those other factors include safety, ergonomics, manufacturability and maneuverability. In addition to showing off how the tractor performs, the team will also be judged on a written submission.

“This is a big project,” Haight said. “You’re not just learning about engineering and building, but you’re also learning how to manage time and manpower and troubleshoot. You run into all the same kinds of challenges that professional engineers run into.”

The competition, sponsored by the American Society of Agricultural and Biological Engineers, starts on May 30, and the Power Pullers have plenty of work to do before then. The tractor’s frame is sitting in a workshop on campus with some of its vital components not yet assembled. Although currently unpainted, the finished product will sport a striking red coat with black detailing, Haight said.

This is his third year working with the Power Pullers, and, with one more year before he completes his degree, he plans to stay involved in some capacity next year. His role in this year’s project started almost immediately after last year’s competition ended.

“Over the summer, we talked with last year’s team and looked for ideas about what we wanted the next year to look like,” he said.

The design work began in earnest when classes began for the 2012 fall semester, and the team was ready to start building by the end of the semester, Haight said.

Once the machine is ready for the competition, the team members have to stay on their toes to keep the tractor in working condition. Haight said most years give rise to unforeseen glitches and malfunctions during the competition. Two years ago, for instance, the team ran up against a clutch failure.

“Most years, it’s not a question of if you run into a problem, it’s a question of how large the problem is,” he said. “But that’s part of the fun of the competition.”

Haight said he’ll be among the first to get behind the wheel once the tractor is completed, and he said the team has its sights on a competitive finish in this year’s competition.

“We’re looking to be in the top 10,” he said. “Iowa State has been at every single one of these competitions since it began, so we’ve got the experience to finish near the top.”

A computer rendering of the completed tractor. Larger image.

A team of students at Iowa State University is putting the finishing touches on a built-from-scratch 1/4-scale tractor to enter in a nationwide engineering competition at the end of May.

“This is a big project. You’re not just learning about engineering and building, but you’re also learning how to manage time and manpower and troubleshoot. You run into all the same kinds of challenges that professional engineers run into.”