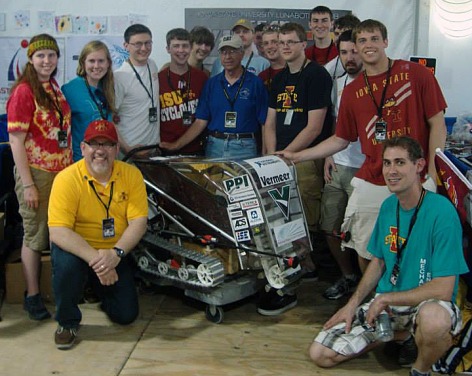 5-28-13 Update: Every year, the students of Iowa State’s Lunabotics Club built a little better robot for NASA’s annual Lunabotics Mining Competition. All those improvements added up to a championship result this year: The Iowa State team won the Joe Kosmo Award for Excellence, first place in on-site mining and third place in outreach. The team made a few tries at autonomous runs (even putting in some overtime at the hotel parking lot to make it happen) but ran into problems during competition. Even so, the team’s robot mined more than 115 kilograms of simulated moon soil on its last run. “It’s nice that after all these years we’ve finally won the whole thing,” said Katie Goebel, the team’s project director. “It’s cool. I knew our team had it in it to win this.”

Video: Watch the 2nd run of the robot at competition.

That’s a big deal, considering last year’s robot won three of the contests in NASA’s annual Lunabotics Mining Competition at the Kennedy Space Center in Florida. (The wins were in mining, outreach and efficient use of communications power.)

Team members were recently in their campus lab assembling, testing and double-checking their mining machine for this year’s May 20-24 competition.

The “lunabot” is designed to scoop up and collect a dusty, abrasive mix of simulated lunar soil. Team robots have 10 minutes to collect at least 10 kilograms of the moon dirt. Winning teams will usually collect seven or eight times that amount. Teams will also compete for other honors, including awards in systems engineering, innovation, multidisciplinary work and a grand prize.

“This is round two of last year’s robot,” said Aren Calder Hill, a native of Rockford, Ill., who just graduated with a degree in mechanical engineering and will soon be working for a Texas robotics company. “But this year things have gotten lighter, more reliable and more efficient.”

Take, for example, the 22 buckets attached to a conveyer belt. The lunabot lowers the spinning belt to the “LunArena” surface and the buckets scoop the silty mix into a hopper for collection and dumping.

Last year’s buckets were made of plastic. “They lasted a day and a half,” Hill said.

This year, they’re welded steel. “We won’t have to bother with them,” he said.

There are other upgrades, said Brian Jend, a senior in mechanical engineering from Oregon, Wis. Those include a collection hopper made from Kevlar and carbon fiber and a frame of welded aluminum tubes.

Team members are hoping the machine can mine about 70 kilograms of material per competition run. Iowa State’s lunabot collected 80 kilograms during its best run last year.

The team is also hoping the lunabot will be fully autonomous this year, driving itself over obstacles, operating inside a designated mining area and dumping soil into a collection bin. Last year’s machine had to be driven by remote control.

Nathan Beougher, a senior in mechanical engineering from Slater, has been busy with all the programming, electronics and controls it takes for the lunabot to operate independently.

As he worked on this year’s tweaks and tests, the robot’s motor systems beeped and beeped.

A few hours later, after another long day in the lab, the team’s lunabot was fully assembled for the first time.

“It was running around and that was great to see,” said Katie Goebel, a senior in mechanical engineering from Urbandale who’s the team’s project director.

And, “assuming we don’t have unforeseen problems,” she likes the team’s chances for another successful trip to Florida. 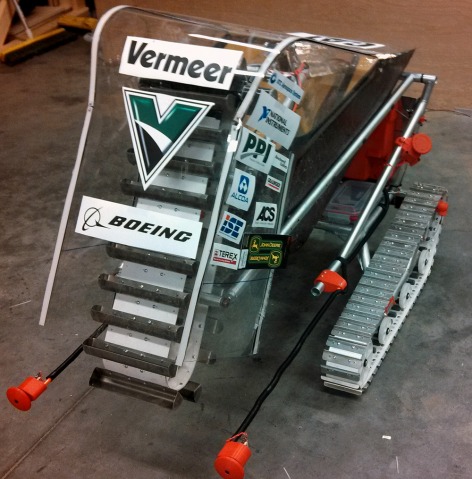 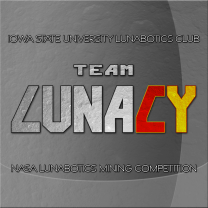 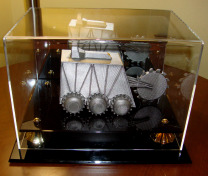 “This is round two of last year’s robot. But this year things have gotten lighter, more reliable and more efficient.”