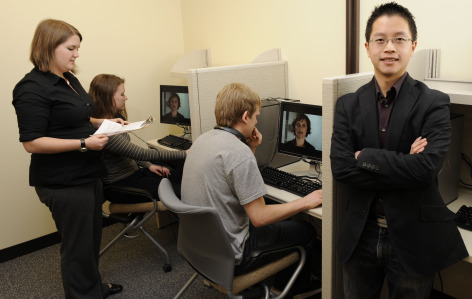 AMES, Iowa – A series of studies conducted by an Iowa State University research team shows that it is possible to manipulate an existing memory simply by suggesting new or different information. The key is timing and recall of that memory, said Jason Chan, an assistant professor of psychology at Iowa State.

“If you reactivate a memory by retrieving it, that memory becomes susceptible to changes again. And if at that time you give people new contradictory information, that can make the original memory much harder to retrieve later,” Chan said.

One of the major findings from the studies, published in the latest issue of Proceedings of the National Academy of Sciences, is the impact on declarative memory – a memory that can be consciously recalled and verbally described, such as what you did last weekend. The effects are powerful because people are retrieving memory and then incorporating new information. Chan and Jessica LaPaglia, a graduate student at Iowa State, tested the impact of new information when presented at different time intervals after the retrieval of the original memory.

If it was immediate, the memory could be altered. However, there was no effect on the original memory when the information was presented 48 hours later. Chan said based on other studies, it appears there is a six-hour window before the memory is reconsolidated after recall and cannot be altered. Likewise, they found no effect if the information was presented in a different context than the original memory.

“During that reconsolidation period, that’s when the memory is easy to be interfered with. Once that window closes and that memory is stable again, if you get new information it should not interfere with that original memory,” Chan said. “We found support for that idea in a number of experiments in which we varied the delay between the interfering memory or the misinformation and when people took that initial test.”

Impact outside of an experimental setting

For the studies, participants watched a 40-minute episode of the TV show “24” in which a terrorist uses a hypodermic needle to attack a flight attendant. They were then tested to reactivate their memory of the show. Following the test, participants listened to an audio recap that included different details, such as the terrorist using a stun gun instead of a needle. Chan said as a result, those participants had a harder time remembering the needle when asked about it on a test – but only if they had recalled the needle before hearing about the stun gun.

Outside the lab, this could have implications in the context of an eyewitness to a crime, Chan said. For example, if someone witnessed a bank robbery and later recalls that event while watching a movie with a scene of a bank robbery, Chan said it is possible the movie could interfere with the original memory.

“One thing we know about how memory works is that you don’t need something to be exactly the same for new things to interfere with your old memory,” Chan said.

In this series of studies, Chan found that context does matter. In one experiment, participants were given information about a stun gun, but it was used in a drug bust. When tested later, they did not experience any effect on their memory of the needle and the flight attendant.

The research provides a better understanding of how we process new information that we learn at work or school. Chan said it can impact how students remember material for an exam. If, for example, students are discussing a class lecture and one student inadvertently provides the others with the wrong information, that could make it more difficult to recall the correct information on the test, Chan said.

The exact timing and the context of the new information are two areas Chan plans to explore with future experiments. He also wants to identify ways for using this noninvasive technique to manipulate memory instead of using prescription drugs that often have side effects. Cases of post-traumatic stress disorder are one possibility.

Chan said the method can target specific unwanted memories while preserving others that are less traumatic. His next step is to see how far they can take this effect and to determine if the method actually weakens the memory or impairs the retrieval.

“If you reactivate a memory by retrieving it, that memory becomes susceptible to changes again. And if at that time you give people new contradictory information, that can make the original memory much harder to retrieve later.”