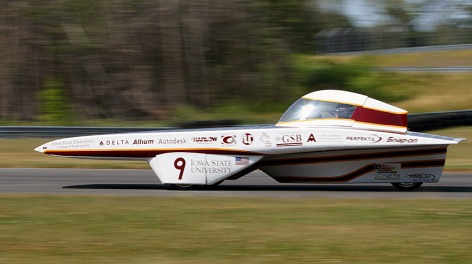 Walk in and the left side of the garage is full of 4-foot by 8-foot sheets of polyurethane foam. The student-engineers of Team PrISUm are gluing the sheets together to build big blocks that will be machined, sanded and polished into molds. The molds will help team members create composite body pieces for the solar car they’ll race next summer.

On the right, wedged between stacks of foam, is Hyperion, the solar racer that finished second in last summer’s American Solar Challenge, an eight-day, 1,650-mile race from Rochester, N.Y., to St. Paul, Minn. The team is preparing the car for this summer’s Formula Sun Grand Prix.

The team has figured out how to juggle the two projects: It takes the glue holding the foam sheets together four hours to dry. That’s plenty of time to tweak Hyperion for its next race.

That race will be June 24-29 at the 3.4-mile Circuit of the Americas in Austin, Texas, the home of the Formula 1 United States Grand Prix. The students of Team PrISUm think they have a competitive advantage racing on a fast track under a hot Texas sun.

“The heat will be a big thing in Austin,” said Zach Noel, a senior from Denison who’s studying aerospace engineering and is Team PrISUm’s assistant project director. “We’re hoping for 100 degree days.”

Then he pulled his phone from his pocket and looked up Austin’s current temperature: 96 degrees.

Team PrISUm likes high temperatures because Hyperion thrived in the heat of last year’s cross-country race. On one particularly hot day in July, Hyperion drove nearly 200 miles without any problems. The cars of six other teams overheated and had to be loaded into trailers and hauled to the next stage stop.

Because one of the team’s previous cars had major overheating problems, Team PrISUm built Hyperion with a bigger battery box designed for better cooling. Noel said there’s plenty of room in there to separate the batteries and create some air movement.

“Hyperion was designed for a race in Texas,” said Joel Eakins, a senior from Grinnell who’s majoring in accounting and finance and is the team’s acting project director. “If we get the sun, we will bring home the win.”

Team members are also looking forward to this summer’s race because it gives them a chance to test components for next year’s car. Hyperion, for example, is already running the electronics built for the next solar racer.

Dakota Morgan, a junior in mechanical engineering from Corydon who’s helped to build and drive Team PrISUm’s latest cars, said the team is also working to improve the aerodynamic fairings covering the car’s front wheels. Panels in the fairings are designed to open in turns, giving the wheels room to pivot. The panels close when the car goes straight, maximizing the car’s aerodynamics. But the system wasn’t fully functional last summer.

“We’re trying to get rid of any problems we had in the last race,” Morgan said.

Team members will transfer those improvements to the new car they’re just starting to build in their crowded campus garage.

Look for the next, yet-to-be-named car to be slightly smaller and shorter than Hyperion. Noel and Morgan said the new car will feature better aerodynamics, a battery box with even better cooling and carbon fiber body panels. All the changes could add up to a car that’s 100 pounds lighter – and that means a faster, more efficient solar race car.

The Team PrISUm campus garage is a busy place this summer: Student-engineers are tweaking last year's solar race car for a track race this month and they're starting to build the racer that will compete in next summer's cross-country race. Team members are confident about the upcoming Formula Sun Grand Prix. Their car has a history of strong performances in hot weather and they'll be racing in the heat of Austin, Texas.

“Hyperion was designed for a race in Texas. If we get the sun, we will bring home the win.”