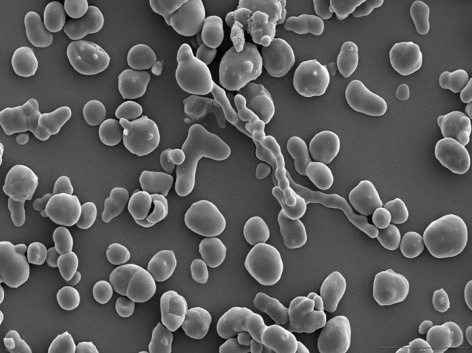 The researchers, composed of about a dozen closely collaborating ISU faculty members, represent a range of disciplines and departments at Iowa State. But they all focus on starches that take time for the body to turn into nutrients.

For example, someone with an average metabolism will digest most of the starch in a piece of white bread in about 20-30 minutes, said Jay-lin Jane, a Distinguished Professor of food science and human nutrition. The researchers are interested in starches that allow humans to continue drawing nutrients from food hours after it’s eaten.

In experiments conducted on rodents and humans, the team of researchers is theorizing that these digestive resistant starches may combat obesity, contribute to disease prevention and help humans cope with diabetes.

What makes a starch resistant?

Many common foods contain starches that are resistant to digestive enzymes, but how those foods are prepared can have a big impact too, Jane said. For instance, a raw potato is an excellent source of resistant starch, but as soon as it’s cooked or mashed, those starches become quickly digestible, she said. Likewise, fried rice is more resistant than steamed rice. Pasta also is a good source of slowly digestible starch, Jane said.

There are many reasons a starch may resist digestion. Much of it comes down to the chemistry of the starches, and cooking a substance can alter its properties as well, she said. Starches that are coated with or form a complex with a lipid – an organic compound that’s often oily to the touch – also may resist the enzymes in the human stomach, slowing down the body’s ability to unlock the nutrients.

The team is working on ways to substitute resistant starch developed in the lab for wheat flour commonly found in bread, noodles or crackers, Jane said. That way, consumers can experience all the health benefits associated with resistant starches while making relatively modest changes to their buying habits at the grocery store.

Resistant starches help to level out the dramatic spikes in blood sugar that can be dangerous for diabetics, said Matthew Rowling, an assistant professor of food science and human nutrition.

“White flour turns to sugar almost as soon as it hits the intestine, which causes a quick rise in blood sugar,” Rowling said. “But if you’ve got a starch that slows down that transition, you can even out the sudden spikes and drops.”

Rowling was the lead author of a study published this month in the Journal of Nutrition that examined the impact of resistant starches in diabetic rats. Diabetes impairs kidney function, and helpful nutrients, such as vitamin D, end up being excreted in urine as a result. However, by introducing a diet heavy on high-amylose maize, which is partially resistant to digestion, the rats in Rowling’s experiment retained more vitamin D than usual.

Following the publication of the study, Rowling said the next step is testing his findings in humans with diabetes. He said it’ll take at least a year to get such a study underway, but he said he’s optimistic an increase in resistant starch will have similar health benefits for humans.

“We know that humans with diabetes tend to have less vitamin D, and many of the same conditions we see in rodents carry over to humans,” he said. “So there’s reason to believe we’ll see the same kind of results.”

Kevin Schalinske, a professor of food science and human nutrition and a coauthor of the study, agreed that it’s likely the results from the rodent tests will translate to humans.

“The models we use for Type 1 and Type 2 diabetes are very well accepted for humans,” Schalinske said.

His work focuses on folate metabolism, which concerns a B-vitamin essential for maintaining normal cell growth and DNA and RNA synthesis. Schalinske said the results of his experiments indicate that a diet rich in resistant starches may lessen the impact of diabetes on the folate metabolism of rodents.

Schalinske said more work should be conducted to determine the minimum amount of resistant starch necessary to produce a desired effect in rats, which were fed a diet composed of 20 percent resistant starch for the experiment.

“It’s pretty unrealistic to make a human eat that much resistant starch,” he said. “So we’d like to find out how low we can go and still get a good outcome.”

Countless microbes call the average human’s digestive system home at any given time, and most of them are helpful. In exchange for a place to crash, microbes in the colon keep digestion running smoothly by fermenting carbohydrates and proteins to produce short-chain fatty acids, for example.

The research team is studying how resistant starches can uphold the right balance of microbes in the digestive system. One hypothesis is that starches that take longer to digest still retain nutrients when they enter the colon, which is beneficial for the microbes that live there.

“The vast majority of these microbes are helpful to us, so we’ve got to take better care of them,” said Diane Birt, a Distinguished Professor of food science and human nutrition.

Birt, who started working with the resistant starch group around 2006, is looking at whether those starches can lower the risk of colon cancer by promoting a healthier environment for the microbes. So far, her trials have been conducted only on rodents, but, like the diabetes researchers, she’s confident that the results will shed light on human health.

Birt said the cooperation among the ISU faculty members has made it possible to examine resistant starches from a multitude of angles. In fact, many of the graduate students attached to the project work with more than one of the professors on differing approaches, she said.

“It’s very integrated research,” she said. “We meet every other week, and it’s a very active collaboration.”

Researchers at Iowa State University are mapping the potentially far-reaching health benefits of starches that take extra time to digest. The researchers are interested in starches that allow humans to continue drawing nutrients from food hours after it’s eaten.

“White flour turns to sugar almost as soon as it hits the intestine, which causes a quick rise in blood sugar. But if you’ve got a starch that slows down that transition, you can even out the sudden spikes and drops [in blood sugar].”