AMES, Iowa -- When Lt. Col. Richard Smith was deployed on a peacekeeping mission in Bosnia in 1999, it was his first plunge into another culture. So when he says the U.S. Army ROTC cadets going overseas this summer have a "phenomenal opportunity," he's speaking from experience.

"You don't realize all the ways another culture is different until you've been immersed in it," he said. "Our future military officers and leaders need to be comfortable operating and working with personnel from other countries. They'll be doing it for the rest of their careers." 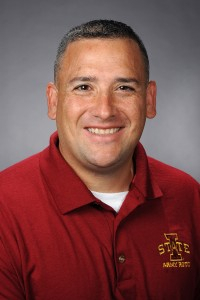 Smith, who is professor and chair of the Military Science and Tactics Department, said leaders of the 21st century military need to develop more cultural awareness and foreign language proficiency.

"There's no classroom that can teach the experiences gained from an overseas immersion," he said.

Each summer, the U.S. Army Cadet Command's Cultural Understanding and Language Program (CULP) sends teams of cadets on summer cultural missions. Under the direction of the U.S. Department of State and at the invitation of about 40 partner nations, 1,350 cadets have been selected for CULP this summer. After a week of preparation at Fort Knox, Ky., they will spend three weeks in another country doing everything from teaching children English to rebuilding roads to training with the nation's military. The program in each country is tailored to the requests of the host nation.

Iowa State's Cyclone Battalion is sending 26 cadets -- more than any other battalion in the entire brigade. CULP cadets are selected from a competitive pool of thousands of applicants on order of merit based on grades, physical fitness tests and an essay.

The student cadets — mostly sophomores and juniors — participate in CULP for credit. They are required to write a paper and brief their team on a political, social or economic aspect of the country. And they learn some basic language phrases before they leave.

Smith is one of 40 mission commanders participating in CULP and will lead a team of 12 cadets to Croatia. They will train with Croatian military cadets on combat techniques, get briefings about different aspects of their military, and meet the Croatian minister of defense and the U.S. Ambassador to Croatia.

Jason Sadowski, an ISU junior in finance from Manitowac, Wis., is among three from Cyclone Battalion on Smith's team. Croatia was his first choice because the mission is military to military.

"I'm really looking forward to working together with their military and seeing how they run things,” Sadowski said. "This will allow me to have experience with another military, which is essential for me down the road in my military career. When I get deployed with my unit when I'm an officer, it won't be my first time encountering a foreign military."

Sadowski, who has heard that Croatia is beautiful, is also looking forward to traveling throughout the country to various military bases.

Eight ISU Cyclone Battalion cadets will head to Kosovo. The Kosovo mission is sponsored by the Iowa National Guard but only available to those cadets who are simultaneously enlisted in the Guard and Army ROTC.

"Cadets from the state of Iowa were a priority to go to Kosovo because we are a sister state or partner with Kosovo," Smith said. "These cadets are National Guard members. So they could actually be sent to Kosovo someday."

Kyle Simpson, a junior majoring in history from Norwalk, is heading to Kosovo on his first trip abroad. His team will stay at the U.S. military base in Pristina and train alongside the Kosovo military. They've put in a lot of hard work to prepare for the trip.

"It's not by any means a free ride to explore Europe," he said.

"What interests me most about Kosovo is how far behind the rest of the world they are," Simpson said. "I'm excited to interact with the local populous and learn about their culture."

The CULP experience ties in to the Army's "strategic goal to develop agile, adaptive officers with diversity and understanding," Smith said. "They may never go to these specific cultures again, but they'll understand that other nations will differ in lifestyles and world perspectives."

This summer, Iowa State's Cyclone Battalion is sending 26 cadets — more than any other battalion in the entire brigade — to the U.S. Army Cadet Command's Cultural Understanding and Language Program. Under the direction of the U.S. Department of State and at the invitation of about 40 partner nations,1,350 cadets have been selected for CULP. They will spend three weeks in another country doing everything from teaching children English to rebuilding roads to training with the nation's military. CULP cadets are selected from a competitive pool of thousands of applicants on an order-of-merit basis.

"There's no classroom that can teach the experiences gained from an overseas immersion."

An additional 7 Cyclone Battalion cadets from Drake and Buena Vista universities are participating.