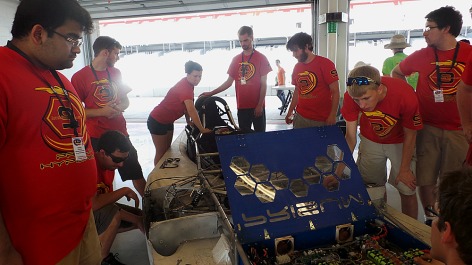 AMES, Iowa -- It was slow and then fast for Team PrISUm at day two of the three-day Formula Sun Grand Prix on Friday.

First, Thursday's problems with a rear hub connection continued on Friday. The team had to pull its solar race car into the pits for 90 minutes to study and fix the problem. As a result the team remains in fourth place, 18 laps behind the leader.

He said the problem could be related to the heat at the Circuit of the Americas, the F1 race track in Austin, Texas, and the home of this year's race for student-designed and student-built solar cars. It was 104 degrees in Austin on Friday and race officials said track temperatures were 135 degrees.

Fast as that is for a solar car, it won't be enough to make up all those laps. But Team PrISUm plans to keep racing.

"We're going to try to catch back up and keep consistent lap times," Noel said.

If the top three teams push each other hard enough that they need extra time in the pits, the Iowa Staters could make up some ground.

"We're optimistic," Noel said. "We'll do what we can. We're definitely not giving up here."

Team PrISUm had slow times and fast times during Friday's second day of racing at the Formula Sun Grand Prix. Mechanical problems carried over from Thursday, forcing the team to spend 90 minutes in the pits. But once the team's solar race car was back on track, it set the fastest lap of the race so far. The Iowa State student-engineers will try to make up some laps during Saturday's final day of racing.

"We're optimistic. We'll do what we can. We're definitely not giving up here."