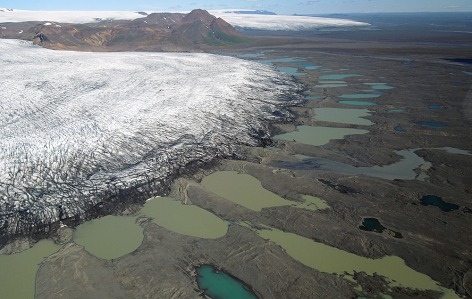 Iowa State University's Neal Iverson and an international team of researchers will study these long narrow hills created underneath a glacier in Iceland. Larger photo. Photo by Tom Hooyer, the University of Wisconsin-Milwaukee.

AMES, Iowa – Long, narrow hills called drumlins form underneath glaciers, far from the eyes and instruments of geologists. And so – despite 150 years of studies, 1,300 publications and fields of drumlins covering vast areas of Canada, the United Kingdom, Scandinavia and the northern United States – geologists still don’t have a good understanding of how the hills are formed.

Those hills are of particular interest as the climate changes and parts of ice sheets increase their speeds, shedding ice more rapidly into the oceans. Knowing more about drumlins and how they affect the slip of glaciers over their beds could help researchers make better predictions about glacier flow and sea level rise.

To find some answers about the mysterious hills, Iowa State University’s Neal Iverson will soon lead an international team of researchers to a drumlin field recently exposed by a shrinking glacier in Iceland called Múlajökull. The glacier’s shrinkage since the early 1990s has revealed a field of drumlins that’s unique because it has been shaped by a modern glacier over the last century, rather than forming during a past ice age.

“This is research that wouldn’t be happening if it weren’t for the recession of the glacier margin right now,” said Iverson, a professor and the Smith Family Foundation Departmental Chair in Geology. “Glaciers in Iceland, like most glaciers elsewhere, are shrinking and that provides scientific opportunities. In this case, fresh drumlins have been exposed that formed under better-known conditions than drumlins of the last ice age.”

The research team will be doing field work at the glacier’s drumlin field from July 29 to August 18. They’re planning a return trip in August 2014. The research is supported by a three-year, $400,000 grant from the National Science Foundation.

The team also includes Jamie Esler, a science teacher at Lake City High School in Coeur d’Alene, Idaho. As part of the PolarTREC program supported by the National Science Foundation, Esler will set up a virtual base camp and fill it with blog posts, videos and photos that will allow people to follow the expedition and learn about glaciers and drumlins.

A team of researchers will camp near a glacier in Iceland to collect sediment samples from drumlins. Larger photo. Photo by Tom Hooyer, the University of Wisconsin-Milwaukee.

Because there’s no way to cross rivers near the glacier, the team will travel by helicopter to its real base camp. The researchers will set up their tent camp about a mile from the glacier. They’re hoping for dry, still weather but are prepared for the heavy rain and high winds that are common in the area.

Once they’re out on the drumlin field, the researchers will collect two types of sediment samples from the drumlins and intervening hollows, taking care not to disturb the sediment structure:

The researchers will compare the data from the tests to historical data from the glacier, including how it was moving when the drumlins formed. In addition, ground-penetrating radar will be used to study sediment layering within the drumlins.

And that, he said, could help solve what the researchers describe as “a long-standing problem in geoscience that’s generated a lot of attention but few definitive results.”

Iowa State's Neal Iverson and a team of researchers are about to leave for Iceland where they'll camp near a glacier and collect sediment samples from long, narrow hills called drumlins. Geologists have studied the hills for about 150 years, but still don't have a good understanding of how they're formed underneath glaciers. Drumlins are of particular interest these days because they could affect how quickly parts of ice sheets move and shed ice into the oceans.

“Glaciers in Iceland, like most glaciers elsewhere, are shrinking and that provides scientific opportunities. In this case, fresh drumlins have been exposed that formed under better-known conditions than drumlins of the last ice age.”

Neal Iverson, a professor and the Smith Family Foundation Departmental Chair in Geology

You can follow the researchers in camp and on the drumlin field. Jamie Esler, a science teacher from Idaho, will post updates, videos and photos here.