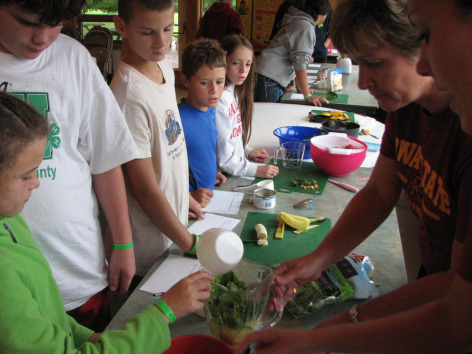 Campers measure out the ingredients for a strawberry, pineapple, spinach smoothie as ISU researchers show them how to make a nutritious snack at home. (Larger photo)

It was a mystery campers at the 4-H Center near Madrid had to solve with their taste buds. Everyone was given a sample of a fruit and vegetable smoothie to try and detect what was in it. After the first taste, most of the campers shook their heads and agreed it wasn’t too bad. Of course, once they were told broccoli was one of the ingredients, several noses started to wrinkle.

It’s that initial reaction that a group of Iowa State University researchers want campers to take away from the Immersion in Wellness Camp. They want to show kids how easy it is to add fruits and vegetables to their diet in ways that taste good. The camp was developed as an effort to lower childhood obesity rates.

Ruth Litchfield, an associate professor of food science and human nutrition, said organizers want kids to live, eat and breathe wellness during the week-long camp. Iowa State graduate students and Boone County Master Gardeners helped teach the culinary and gardening lessons. It was more than just a chance to taste test different foods. Campers were taught how to properly wash and store foods to prevent foodborne illnesses, make simple and nutritious snacks and how to grow their own produce in the garden. 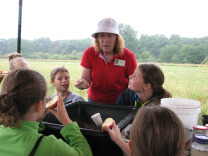 The hands-on experience in the garden is a first for many campers. Christina Campbell, an associate professor of food science and human nutrition, said it often takes some encouragement to get kids to try fresh vegetables, like sugar snap peas, grown in the camp garden.

“One little girl was quite reluctant, but I assured her, she would be fine if she ate the pea,” Campbell said. “She finally gave in and ate the pea. The most amazing look of delight came over her face; she looked up at me and smiled and said, ‘Is this what vegetables taste like?’”

Campbell, Litchfield, and Lorraine Lanningham-Foster, an assistant professor of food science and human nutrition, also hope to learn something from the lessons they’re teaching at camp. Campers will complete surveys before, at the end and six months after camp, so researchers can assess changes in nutrition knowledge, preferences and lifestyle. The ISU team will use the research to develop programs aimed at helping kids with diet and exercise.

This is the second year researchers have collected data at the camp. Based on the initial results from last year, campers consumed more fruits and vegetables grown in the garden after attending the camp. Litchfield said campers also felt empowered to make better decisions about eating and felt they could prepare or incorporate more fruits and vegetables in their diet. 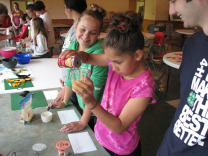 Campers sharpen their culinary skills by learning how to properly measure and handle foods in the kitchen. (Larger photo) 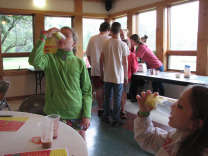 Campers sample the avocado-mango smoothies they made as part of the Immersion in Wellness Camp. (Larger photo) 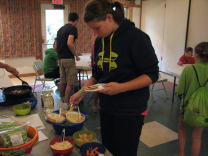 Campers get to taste test a variety of foods and compare prepackaged items to homemade. (Larger photo)